Why? Because You're A Creature Of Pure Evil, Of Course.

Aside from wasting away year upon tedious year in medical school, the best resource for individuals wishing to become experts in the science of medicine and well-being is, of course, the television commercial.  It was medical advertising that first brought to the world’s attention such hidden maladies as Restless Leg Syndrome (RLS) or Irritable Bowel Syndrome (IBS, formerly known as ‘the trots’).  TV commercials reassure aging men with overactive bladders that they don’t suffer alone, and have made it possible to publicly discuss adult incontinence with only mild discomfort.  As it has with so many other areas of knowledge–politics, the arts, Jersey Chic–television has imparted modern society with a robust and erudite knowledge of all things medical.

In recent years, commercials have shed light on the previously misunderstood ailment, psoriasis.  Psoriasis is a skin condition which can result in painful and embarrassing rashes.  Medical professionals have long been acquainted with psoriasis’ physical blight, which sometimes causes the afflicted to be confused with lepers.  But one heretofore-undiscovered symptom which can be inferred from the commercial is that, in addition to turning human skin into tree bark, the malady exerts an adverse effect on mental capacity.  Were this the case, the producers and advertisers behind anti-psoriasis treatments wouldn’t feel compelled to explain that the little men depicted in the commercial as banging on plates are not at all like the actual biological processes of the disease. 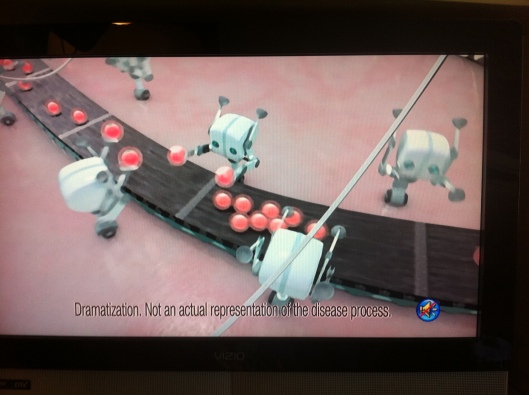