Narco, Soldier Or Cop: A License To Kill Is Just One Of The Perks. Señoritas And Cocaine Are Two More.

A dismal job market is forcing employment-seekers to think creatively, possibly pursuing previously unconsidered revenue sources.  Some enterprising souls are reversing a decades-old trend, and leaving the United States to seek work in Mexico, particularly along the lawless border region.

Ciudad Juarez: You Will Never Find A More Wretched Hive Of Scum And Villainy.

Most new arrivals to Mexico’s border towns discover what the old timers already know: working in a maquiladora sucks ass.  Six days of life-numbing factory work per week at a parakeet’s pay is enough to make anyone dream of a better life.

Thanks to the regular bloodletting across Northern Mexico, young men have another option.* Jobs on all sides of Mexico’s ongoing narco-war are plentiful, due to rapid turnover and increasing demand both for drugs and for a continuance of the senseless conflict.

Yeah, We Thought La Barbie Would Do A Little Better For Himself, Too. Still, It Still Beats The Kind Of Tail He Can Expect To Get In A Mexican Jail.

Career options within this fast-growing industry are varied.  But for candidates not averse to mayhem and risk and who speak fluent Spanish, a fast life awaits among the blood and dust .

Currently, the most popular choice is narco.  Although there is little job security, and the initial pay is a pittance, a good narco can rise quickly.  Many find the toil worth it–seasoned gunmen often have more cash, coke and señoritas than they can spend, snort or fuck in their typically truncated lifetimes.

There are any number of organizations to join, but prospective applicants should choose their organization wisely.  A cartel which is in the decline or which has fallen into disfavor with the Mexican government is a poor choice.

Joining The Mexican Army Allows Young Men To Take A Leadership Role Within Their Own Communities.

One of the great advantages to working as a narco is that if you can stay alive long enough, you’re almost assured of rising to the top.  And it’s a position for life.

However, many young men are overlooking great opportunities in the Mexican Army or the police.  These jobs are thought to be mundane and unexciting, but this is largely untrue.  In addition to benefits and their regular pay, soldiers and police officers also have access to women and drugs, plus a license for nearly unlimited violence.  Long hours, paperwork and a tendency to be assassinated are among some of the headaches associated with these jobs. 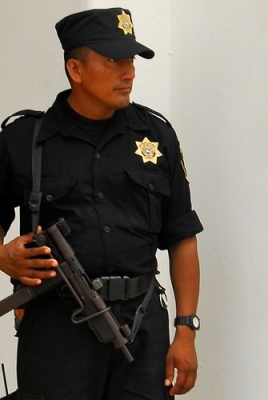 The Mexican Narco Wars are booming, and there’s never been a better time to get started in this exciting industry.  With America’s insistence that Mexico continue to play along in the War On Drugs, it’s only going to get hotter!

*Opportunities for women are still scarce at this time.  Women looking for work outside the maquiladoras may be forced to settle for narco girlfriend or corpse.  Probably both.