A Journey Of 1,000 Miles Begins With A Single Step.

Don't Pity Him, Kids--Time Will Have Its Way With You, Too.

Hegyes rose to fame in the 1970s playing Juan Epstein, a wiseacre Puerto Rican-Jewish street punk with an impressive Jewfro. Actors Lawrence Hilton-Jacobs (the black one), John Travolta (the successful one) and Horshack (Horshack) rounded out the ensemble cast of Kotter, which ran from 1976 to 1979. Despite its initial popularity, the show quickly lost steam when Travolta’s film career took off, and when viewers began to realize that the dead-end lives of four doomed, inner-city losers wasn’t so funny after all.

In later years, Hegyes supported himself by teaching, and although he continued to act into the twenty-first century, never again found a role as iconic as Juan Epstein. Hegyes’ is survived by his two children. Today we, along with millions around the globe, share their grief, and give voice to the silent, angry question on so many minds: “Why couldn’t it have been Horshack?” 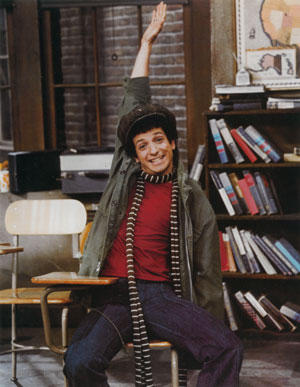 Put Your Arm Down, Ass-Chasm. Your Time Will Come.

4 thoughts on “Sweathogs Begin To Die Off”