Diminutive former child stars Emmanuel Lewis and Gary Coleman are often mentioned in the same sentence. At first glance, the similarities seem obvious: both were stunted African-American Eighties sitcom stars prized for their cuteness. And when their respective TV shows were cancelled, the two men faded from the public consciousness.  But the similarities end there.

Don’t Feel Sorry For Him; Emmanuel Can Take Care Of Himself. He’s Only Here To Hook Up With Brooke.

Coleman’s sad fate has been well documented, not least by this publication. After Diff’rent Strokes faded away, Gary struggled, both financially and personally. Gone from him were any traces of the beguiling cuteness which in 1978 seemed so limitless. He was a surly, unwilling TV presence, seemingly at odds with his Whatchootalkinbout past, but cognizant that nostalgic catchphrases were his sole remaining tether to show business. After a number of pitiable episodes which were captured on video, Coleman found himself in a sexless marriage with a known cooze. His sad, short story came to an end last year.  God’s final joke on Coleman, having previously left him dwarfish, broke and virginal, was to let him die in Utah.

“It’s Not Fair. I’m Taller, Have A Sexier Voice And Made Way More Money. I’ll Bet You Can’t Name Even One ‘Webster’ Catchphrase. Well? You Can’t, Can You?”

Lewis, on the other hand, not only remains alive, but seems to have a life worth living. The adorable little fellow, who at 4’3″ is almost a half-foot shorter than was Coleman, has retained much of his former cuteness, still ranking consistently between ‘Lolcat’ and ‘Baby Bunny‘ on the Universal Cuteness Scale. Nor does it appear that the little skonk has any compunctions about using his former celebrity in the pursuit of nooky. He has no doubt already staved off the virginity which haunted Coleman throughout his loveless life.  Lewis, an aficionado of karate, has taken various steps to improve himself. In 1997 the randy runt earned a degree from Clark Atlanta University.

Beware, Ladies! Lewis Is In Complete Control Of His Hyper-Adorableness. He Uses It Like A Weapon.

And yet, despite the differences between these tiny icons, it is not by accident that the pair is so often associated with one another. The most popular theory to explain this is that Lewis, for whom records date back only as far as 1971, is actually Gary Coleman from a parallel plane. The evidence for this is circumstantial, but compelling. Where Coleman was dissatisfied, sullen and virginal. the former Webster is a charming, happy little man-whore. 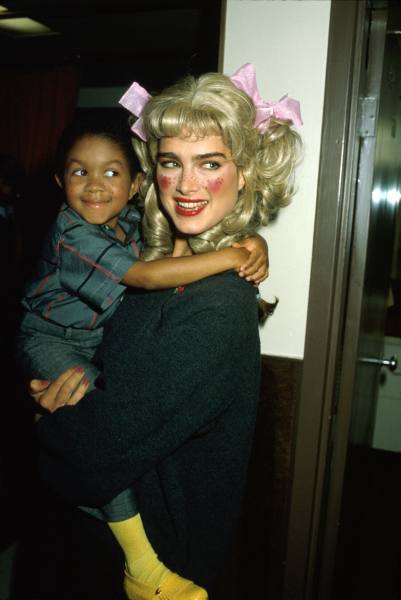 She Came With Michael, But Emmanuel Took Her Home.

Whether Emmanuel Lewis is actually Gary Coleman from an evil alternate universe or, however unlikely, the two are actually different individuals with no relationship between them, there can be no mistaking the very different roles they play in society and within their own lives. Lewis is the Antigary–he may yet die young, but you can bet it will be a demise worthy of the man once called “The Biggest 40 Inches In Hollywood,”  possibly involving a hooker and a handgun.

SEE EMMANUEL DANCE IN THE LIVING ROOM WITH THE KING OF POP!

SEE WHY EMMANUEL IS AN INTERNATIONAL SUPERSTAR!

SEE WHAT JEALOUS GARY COLEMAN HAD TO SAY ABOUT EMMANUEL’S ADORING LEGIONS OF FANS!

7 thoughts on “Emmanuel Lewis: The Antigary”