You probably know by now that my hapless college friend Steve frequently found himself on the receiving end of innumerable pranks and other instances of only partially deserved churlishness. There were many times, however, when his particularly high-strung temperament actually fanned the flames of his torment, mountanizing an incident that people lacking his unique set of problems would consider little more than a molehill. One such episode I’ve come to think of as the “Dewey Affair.”

This was back during my decidedly hazy first senior year of college. I was hanging at my place with Steve and three other friends. Someone cracked a joke that I no longer remember, and I said in response, “That hasn’t been funny since Thomas Dewey was president.” It was meant as a joke–a pretty nerdy one–and not something to be taken seriously, and everybody took my meaning. Everybody, that is, except Steve.

“Thomas Dewey was never president,” he said, looking at me seriously, and managing to sound a little condescending.

Something very strange and primal happens to me at these moments, a sort of psychic whiff of blood in the water, a wickedly perverse desire to argue not for reason but for its own sake. I’ve given this aspect of my nature a good deal of thought over the years, and the most helpful comparison I can draw is that it is akin to the sudden compulsion of a heretofore sleepy dog to chase after a boy who runs from it. In about the span of a heartbeat, a notion which had never before crossed my mind becomes a game plan.

It Happens Before I Even Realize It.

“Well, sure he was, Steve,” I said, surprising even myself with the ease and conviction of my reply. “You’ve seen that headline, DEWEY DEFEATS TRUMAN?

SEE? You Should Pay Better Attention To History.

“That was a mistake,” Steve said.

“A mistake?” I laughed and looked at the other guys in the room. “Steve, that picture is famous. It wouldn’t be famous if it were a mistake now would it?” Some of the other guys laughed at this, God bless ’em.

Steve was beginning to get upset. His mouth worked for a moment as he searched for something to say, but could only manage, “Dewey was never president.”

“C’mon, Steve–I’m a history major,” I said. “My emphasis is on American history in the 20th Century. Don’t you think I’d know who was president?” 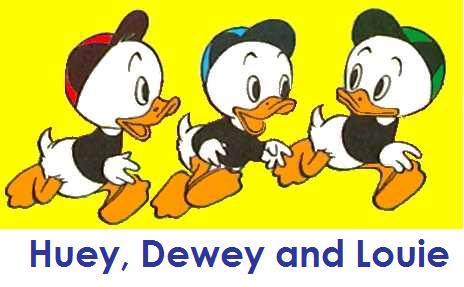 Call Me A Bigot If You Like, But It’ll Be A Cold Day In Hell Before I Vote For A Duck. You Know They’re Just After Our Women.

“Thomas Dewey was never president.” Steve was turning red now. Like a moth drawn to a flame, Steve seemed eager to assist in his own undoing.

“Well, then who pushed through the Johnson-Ready Bill?” I asked, ignoring the uncomfortable facts that not only are bills put forward by the legislative branch rather than the executive, but that furthermore, to the best of my knowledge no such bill existed.

“That was Eisenhower!” he said, nearly screaming now. “Look,” he said, jabbing a finger at me, “I’ll bet you a hundred bucks that Thomas Dewey was never president.”

“Fight Your Own Battles, Son.”

“You’re on,” I said, and Steve stormed off to his place to secure $100 worth of proof. He lived close by, and was back within moments, barging in bearing an open text-book in one hand, and stabbing at me wildly with the other as he spoke.

“See? Thomas Dewey was never president!” he said, his aggressive index finger now turning its wrath against the book, striking a single point in the middle of the open page with a staccato THOK-THOK-THOK!

I didn’t say anything, and Steve looked up from the book to find me looking at him quizzically, not bothering to look at the information on the page.

“Well, of course he wasn’t, Steve. Who put that idea in your head?”

He stood there open-mouthed for a moment. “You said…you said that Thomas Dewey had been president.”

“Don’t Recognize Me? I Was Very Nearly The Leader Of The Free World.”

I laughed. “That’s ridiculous. I said no such thing.”

Suddenly, all the impotent heat was back, as if it had never left him. “You did!” he said.

I shook my head slowly, and what I hoped was pityingly.

Steve seemed to expand with fury. “He did!” he said, turning now to the other guys in the room. “You heard him! He said that Thomas Dewey was president.”

“Leave me out of this,” said the third dude.

Completely ablaze now, shaking and nearly in tears, Steve turned to me again and accused, “You said Dewey had been president!”

Steve Isn’t The Kind Of Guy To Ever “Look Back On This Someday And Laugh.”

Then I said the thing that really did it, the thing that made Steve stop speaking to me and the other guys in the room for almost thirty-six hours, which was a small eternity for him. I think what made it so delicious was that I said it with a straight face, glacier-like patience and with such a genuine sense of puzzlement that poor Steve’s conscious brain just seemed to break down and give itself over entirely to full-on “nucking futs” mode.

When he accused me (rightly) that final time of propounding a president who never was, I told him, “Steve, I’m a history major with an emphasis on 20th Century US history. Why would I make an asinine claim like that?”

A colossal slamming of doors announced his exit, and then only slightly more softly, his arrival at his own place not far way. Although he would eventually cool off a little over a day later, we kept our distance from him that evening, as for about the next hour the night was filled with the sound of Steve screaming and breaking things.

“Steve, Try Not To Take Things So Seriously, Man.”

30 thoughts on “Tales Of The Dewey Presidency”