Editor’s Note: Readers wishing to familiarize themselves with Nigeria’s turbulent politics may wish to peruse Promethean Times’ exhaustive analysis of the situation.

Shadowy Nigerian Vice President Goodluck Jonathan has assumed power following the mysterious death of President Umaru Musa Yar’Adua.  It is widely believed that Jonathan has been defacto ruler of Nigeria since word first began to spread of the ailing president’s illness.

Flanked By Soldiers, Goodluck Jonathan Is Briefed By An Operative Known Only As "The Hyena"

In a nation like Nigeria, rumors abound.  Among the more prevalent of these claims is that Jonathan exercises power with the help of a mysterious organization which he allegedly leads: Goodluck’s Organization for Brotherhood and Leadership In Nigeria (GOBLIN).

GOBLIN came to the world’s attention several years ago after threatening to detonate a stolen nuclear bomb in an undisclosed Western capital if the United Nations failed to meet its demands.  The UN capitulated, wiring the requested $12,850.00 to an undisclosed offshore account.  Since that incident, dubbed Clusterbomb by the press, the group has maintained a relatively low profile until now.

GOBLIN’s activities are said by critics to originate from Nigeria, where they claim the organization is fomenting unrest between Christians and Muslims for its own sinister purposes.  Nigeria’s state department calls these claims “Hogwash.”

Several rumors regarding Yar’Adua’s death are also said to be false.  According to Nigeria’s official coroner, Dr. Malcom Happytimes:

“There is no truth to the rumor that Yar’Adua died after being slowly lowered by a rope into a tank full of ravenous sharks.

Likewise, the story that the former president was found encased entirely in gold is also fiction; no doubt the fabrication of an unscrupulous press.

It is my hope that soon people will let go of these fantastic tales and accept that the poor man died of natural causes.  He was fifty-eight years old, after all–no young warrior.”

The Jonathan Cadre has so far made careful use of its power.  A source close to the president alleges that Jonathan is uncomfortable in his leadership role.  The anonymous source claims that although the despot enjoys the title of President and its incumbent privileges, Jonathan would prefer returning to the life he knows best: the brutal lackey of a Machiavellian master bent on world domination.

Although several candidates are rumored to be in the running for the position of Jonathan’s dark master, three show particular promise.  All three seem to personify the candidate described in the posting: a ruthlessly autocratic, horribly disfigured creature of pure evil. 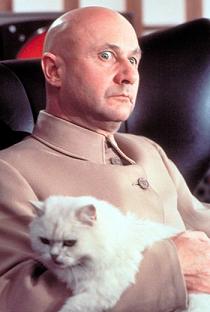 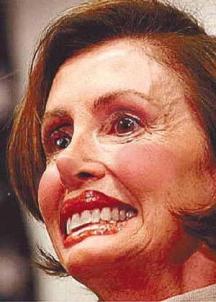 Pelosi: As Deadly As She Is Beautiful

3 thoughts on “NIGERIAFINGER: In His Infernal Majesty’s Secret Service”