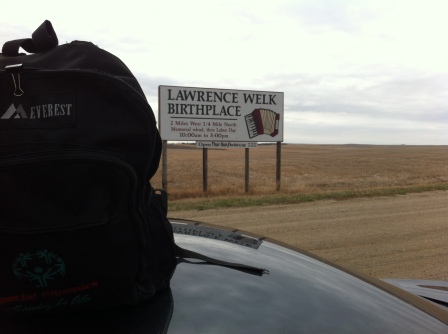 From His Wind-Whipped Prairie Exile, Tardsie Writes: "People Ask Me All The Time If This Job Gets To Me. Hell--You Can See I'm More Clip Than Zipper These Days; I Lost Track A Long Time Ago Of How Many Nights I Cry Myself To Sleep. But Would I Quit? No Way--I Love It Too Much."

We didn’t create Promethean Times so that we could do things the easy way. We believe first and foremost in solid reporting and fierce investigative journalism. It’s no great feat to cover the news in exotic locales like Hawaii, the Caribbean or Ibiza. But when a story reveals itself in a blighted, lifeless place where no reasonable person would want to go, the real journalists rise to the challenge.

Promethean Times’ Editor-in-Chief, Tardsie D. Bagg has been sent on assignment to the Dakotas. In such circumstances, it can be easy to exaggerate the inconvenience or degree of difficulty. However, we feel entirely justified in comparing Tardsie’s departure from our cozy coastal environs for the endless expanses of this half-frozen horizontal First Circle of Hell to the expulsion of Adam and Eve from the Garden.

But Where You Live Is Pretty Cool, Too.

The Death-Knell Of A Cherished Way Of Life Will Be Sounded Sometime In 2015-2016, When Indoor Plumbing Finally Comes To The Dakotas.

As the Dakotas are, after Delaware and American Samoa, indisputably the nation’s most forgettable territorial possessions, readers might wonder just what’s happening on the prairie that could command the attention of a busy A-Lister like Tardsie. Instead, we ask you, what ISN’T happening in the Dakotas? We can’t tell you everything, but here’s a little bit of what our very special Special Olympian is up to in the land that time forgot.

This Is What Passes For News Here In Terra Lame-O. Makes You Want To Give 'Em Something To Talk About, Doesn't It?

A taxi driver, bragging about North Dakota’s recent oil-boom, told me that the state has the largest Camaro dealership anywhere, proving that Dakotans have more money than class. Pray for me, friends. ∞ T.

22 thoughts on “Dispatches From Nowhere”