Fact: More Americans Can Hum The Waltz From '2001: A Space Odyssey,' Than Can Identify Europe's Second-Longest River.

A red, seething mass of toxic sludge from an aluminium leak in Hungary has now reached the storied River Danube, Europe’s second longest river.  The pH level of the Danube, which flows through 10 European countries, is 9.8 in the affected areas when it should fall within a range of 7-8.

This will undoubtedly prove catastrophic to the environment, perhaps harkening back to a former European disaster–Chernobyl.  The economic impact will be onerous, as will the cost in lives and human suffering.

The Environmental Impact Has Been Particularly Horrid.

Four people have been killed so far by the rambling death blob, and hundreds more forced from their homes.  The topsoil in the affected area has become so saturated with toxic chemicals that it will likely have to be replaced.  This will come at great cost.

MAL Hungarian Aluminium Production and Trade Company, the outfit responsible for the leak, is doing its level best to make BP’s response to the Deepwater Horizon spill look like a NASCAR pit crew by comparison.  They’ve offered $150,000 to help pay for the damages, and are calling it good.

Leaders of potentially affected countries are looking for a silver lining in this disaster.  They are said to be holding out hope that this environmental crisis will distract from the growing unrest over recent austerity programs, or that perhaps the swarming red mass will devour some of the protesters. 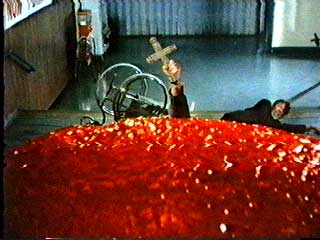 "At MAL Hungarian, We Smother The Competition."

While BP’s ruptured well in the Gulf of Mexico continues to spew crude like Charlie Sheen on a runaway Tilt-O-Whirl, the nefarious petroleum giant’s brain trust has run bone-dry.

In the early days of the crisis, BP’s Idea Men knew that to realize workable solutions, they would need to ask new questions.  Working at a fever-pitch, sometimes logging 20-hour days, it was less than two months later when BP scientists asked themselves the question which would prove their interrogative Rosetta Stone:

What if the rupture and resulting spill had occurred not in the Gulf of Mexico, but rather in Gotham Harbor?

In the simple elegance of the question, an answer quickly asserted itself: Giant Scissors!

Having Something To Do Keeps BP Executives From Hanging Themselves: FOXNews.com – BP to Use Giant Shears to Cut Leaking Pipe.