We Only Bring This Up Because There Seems To Be Kind Of A Pattern Going On Here, But You Know They DO Make Cell Phones Without Cameras In Them.

Quickly following the theatrical release of her crossover bid Sucker Punch, racy photos of tween idol Vanessa Hudgens were released on the internet.  This makes an astounding third time the unlucky actress has seen her intimate photos leaked.  In an amazing coincidence, all three leaks have occurred while films featuring Hudgens were playing in theaters.  Despite being the victim, societal double-standards and Hudgens’ own status as a role model, should be enough to bring the blame for this incident squarely on the young starlet’s shoulders. 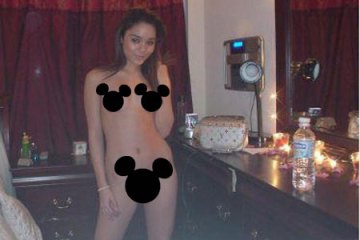 If You Rent 'High School Musical' Expecting To See Anything Like This, You're Going To Be Disappointed. A Lot.

Although they are few in number, Hudgens has her defenders, who point to her recent breakup with actor Zac Efron.  Supporters contend that the sudden absence from Hudgens’ life of such a juggernaut of testosterone-drenched heterosexual dynamism has affected both her judgement and libido.

Sometimes We Fear Zac Will Never Find The Right Girl.

Of course, the loudest voices will ring with scorn and derision.  Moralists will find much to condemn in these images, as will those who think the human body is a source of shame and sin.  But with the scandalous proliferation of internet nudie pix by such low-rent hags as Amber Portwood, isn’t it a bit of a nice change every now and then to see an attractive person naked?

Look--Your Best Shot Is To Go For 'Pretty On The Inside'--And We Have To Tell You, This Is Not Helping.