You Won’t Find The Really Good Ones In Here.

We very much appreciate a piece of well-expressed wisdom. For this reason among so many others, we have continued to compile over the years a collection of quotations which not only inspire us, but inform the philosophy which has thus far guided us through a life which has been pretty damn awesome.

Taking our inspiration from Bad Brad, the eccentrically eclectic force behind You Jivin’ Me Turkey?, who never fails to find powerfully affecting–and largely unfamiliar–quotations, we’d like to start your weekend with some of the passages that figure most centrally in our own lives. And just as our lives are improved in some measure by the unexpected wisdom curated by folks like Brad, we hope that you will find something in what follows which speaks to your own journey. Have a great weekend, folks!

This Is An Actual Photo Of Brad. He Has A Condition Which Makes Him Look Like An Animated Character. Don’t Make Fun.

For what is it all but being hatched,

And running about the yard,

To the day of the block?

Save that a man has an angel’s brain,

And sees the ax from the first!

The Difference Between The Two Of You Is That You See The End Coming. So Why Not Live It The Best You Can?

The supreme happiness of life is the conviction that we are loved.

There Is No Ordinary Life

And like a dying star is every work of your virtue: its light is always still on its way and it wanders —  And when will light no longer be on its way?  Thus the light of your virtue is still on its way even when the work has been done.  Though it be forgotten and dead, the ray of its light still lives and wanders.  That your virtue is your self and not something foreign, a skin, a cloak, that is the truth from the foundation of your soul, you who are virtuous.

People don’t like being around despair.  Our tolerance for the truly hopeless, for those who are irremediably broken by life, is strictly limited.  The sob stories we like are the ones that end before we’re bored.  I understood that I had good and true friends in these three men, that it was all for one and one for all and these were my musketeers.  I also saw that I needed to behave better for their sakes.  I had become their nagging toothache, their dose of gut-rot, their ulcer.  I needed to get better before they decided to cure themselves of me.

If friendship is a fuel, the supply of it is not endless.

Defeat is one thing; disgrace is another.

The Main Reason Winston Churchill Was Able To Achieve Renown As One Of History’s Greatest Englishmen Was That He Was Half-American.

A gentleman can live through anything.  He faces anything.  A gentleman accepts the responsibility of his actions and bears the burden of their consequences, even when he did not himself instigate them but only acquiesced to them, didn’t say No though he knew he should.

I’m determined to stand whether God will deliver me or not.

Strange, how in some way one always has the impression of being fortunate, how some chance happening, perhaps infinitesimal, stops us crossing the threshold of despair and allows us to live.

So Buck Up, Pussy!

You Can’t Know Everything, And Why Would You Want To?

And Frith called after him, ‘El-ahrairah, your people cannot rule the world, for I will not have it so.  All the world will be your enemy, Prince with a Thousand Enemies, and wherever they catch you, they will kill you.  But first they must catch you, digger, listener, runner, prince with the swift warning.  Be cunning and full of tricks and your people will never be destroyed.’

We Always Thought Watership Down Was About A Bunch Of Rabbits.

For My Grandfather, Who Lucked Out Of Pearl Harbor And Felt Like A Fraud For It

I didn’t know you could steal your own life.  And I didn’t know that it would bring you no more benefit than about anything else you might steal.  I think I done the best with it I knew how, but it still wasn’t mine.  It never has been. 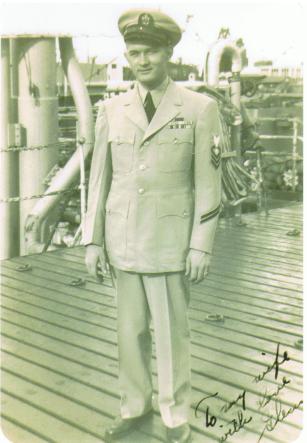 We Know That Forgiving Yourself Was Never Going To Happen. Remember, Though–For Those Who Loved You, It Wasn’t A Betrayal But A Miracle.

And yes, we know the title of this post should more properly be written ‘The Words By Which We Live,’ but that sounds stuffy. Grammar nerd. ∞T.