Asians, fun with stereotypes, journalists, Lisa Ling, stereotypes, stupid people, tolerance, Why am I so stupid?

Lisa Ling: Herein Is Contained All The Intellectual Fire-Power Of An Amish Cap Gun.

In this era of steadily-ratcheting racial tensions, pitting humanity’s ancient tendency for clannishness against society’s current preference for enforced tolerance, it’s critical to recognize those individuals who go to great lengths to promote understanding among the races.  One such trailblazer is TV’s Lisa Ling, who proudly puts an end to the degrading stereotype that all Asians are preternaturally intelligent; Ling’s as dumb as a box of rocks.

Wildly Funny Russian Comedian Yakov Smirnoff Once Compared His Adopted Homeland With The Country Of His Birth, Saying, "In America, You Can Always Find A Party. In Russia, Party Finds You."

Revelations from the most recent round of WikiLeaks.org releases have stunned the international community.  Among them are documents in which a Spanish prosecutor termed Russia a “virtual mafia state,” and said that he “cannot differentiate between the activities of the government and organized crime groups.”

Like Many Anti-Putin Journalists, Anna Politkovskaya Was The Victim Of An Unlucky Accident. The Elevator In Which She Was Riding Malfunctioned And Shot Her Four Times.

The prosecutor, Jose Gonzales could not be reached for comment.  This is largely due to safety concerns for anyone foolish enough to come within 100 feet of the doomed Spaniard.  Dr. Emil Haagerdäddi, an expert on Russian statecraft, said, “Mr. Gonzales has made an enemy of the Putin government,” adding that in 1940, Stalin’s government had gone to great lengths to plant an ice pick in Leon Trotsky’s skull, “He’s pretty much fucked.”

"You See That Guy? When I Was In Seventh Grade, That Guy Was The Editor Of The School Paper, And He'd Always Misspell My Name 'Poopin.' You Still Think You're Funny, Mr. Funny Newspaper Guy?"

Further allegations in the leaked documents border upon the fantastic.  So-called “oil experts” cited in the diplomatic cables allege that Russian Prime Minister Vladimir Putin amassed at least some portion of his vast fortune through extralegal means.

Russian President and Putin stooge Dmitry Medvedev was quick to dismiss the allegations as “cynicism,” explicitly pointing to the US.  Medvedev further indicated that Putin’s longtime involvement with law-enforcement as a KGB officer makes him especially sensitive to the delicate questions of personal liberty.

This Putin Critic Died Of Radiation Sickness. What Did He Think Would Happen When He Unknowingly Ingested Polonium-210?

Russian journalists had this to say regarding the allegations: 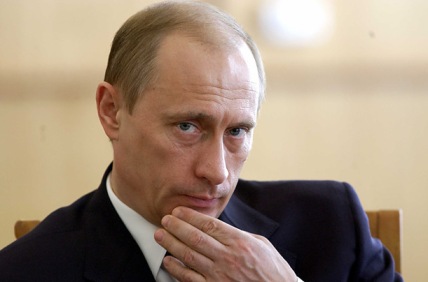 "Come on--I Swear I Won't Be Mad. Seriously. Just Tell Me Who Said That. No, Really--I Think It's Totally Funny What Was Said And I Just Want To Know Who Said It, That's All. Come On, Tell Me."

The Cold War is over, and its authors long dead.  A New World Order rises, one in which the United States and fellow democracies Russia and China will share the responsibilities for creating the harmonious future we all deserve.  Until then, demonizing Russia’s tyrannical overlord is not only foolish, but possibly unfounded.  Unless Putin’s critics can produce a reliable witness, one who can be relied upon not to die prematurely, there’s little evidence that Putin is anything other than the gentleman he purports to be.

Fake newspaper USA Today must believe that brilliant, dirty, Russian weirdo Grigori Perelman is full of shit.  Why else would they think it newsworthy that Perelman didn’t show up to collect his $1M prize for solving the Poincaré Conjecture?

Readers of Promethean Times know what the “journalists” at USA Today are just finding out: Grigori let the prize committee know what they could do with their $1M ages ago.

Said Grigori at the time, “I have everything I want.”

Is Not Even Real Newspaper, Anyway

Is True.  How Many Times Must I Tell You I Am Crazy Bastard.  You Read: Reclusive Russian math genius is a no-show to pick up $1M prize money –.