According to his former floozy Izabella St. James, Hugh Hefner doesn’t just look, smell and act like an incontinent old man–he makes love like one as well.  In her cleverly titled new book, Bunny Tales, St. James claims that the 84 year-old is a sexual ‘Dead Fish’ who simply lies on the bed while a nubile and semi-retarded teenager humps him furiously.

St. James’ revelations shatter more than just the popular image of Hef as a ladies’ man and all-around-stud.  According to Hef’s former harlot, even the famed Playboy Mansion has seen its luster fade.  The once-fabulous pleasure palace of 10,000 delights is now a shabby and echoing ruin, festooned with dogshit and reeking of urine.

Hefner lost his virginity at the decidedly un-swinging age of 22, and has spent the next six decades attempting to account for this tardiness.  During Playboy’s Watergate-era heyday, the Mansion would throb with orgiastic depravity while sill managing an air of class and swinging sophistication.  And Hef–whether he was snorting lines off Cher’s ass or balls-deep in a group-grope with Sylvia Miles and Burt Bacharach–was right in the middle of it all. 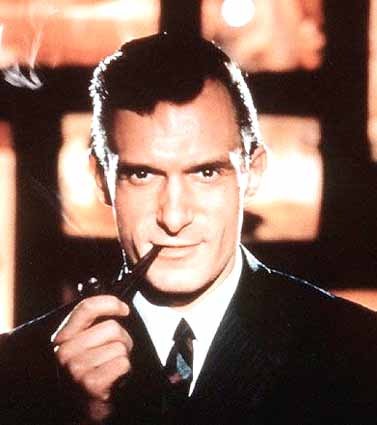 Thanks To A Combination Of Dementia And Cataracts, This Is The Face Hef Sees In The Mirror Every Morning.

But forty years is a long time–a lifetime in third-world countries–and not even Hefner’s famed virility could withstand the implacable ravages of time.  The miracles of modern science, most particularly Viagra, have allowed Hef to make a pretense of his old existence by breathing life into the old man’s withered dingus.

But science has no answer for the rest of Hef’s age-related ailments.  And now, Hef uses his dwindling fortune to make a charade of the life which for one musk-drenched moment in time saw him on top of the world.  He perpetuates this rather sad fantasy in the vain hope not to stave off time, but to help him forget that he’s a crumbling old man with the hearty, virile penis of a healthy sixty-five year old.

i roted this books all by myself lol