New Hampshire And Iowa Have A Lot To Say About Presidential Politics.

With a combined total of 11 (out of a nationwide total of 538) electoral votes, unimportant American States like Iowa and New Hampshire wouldn’t normally have very much say in who wins the US presidency.  That would be like choosing a first-grade teacher based solely on the preferences of the weird kid who eats paste.

Iowans Determine Their Presidential Candidates Via The Caucus.

But thanks to America’s primary process, it’s not just important and worthwhile states like California or New York which determine the leader of the free world, but also cultural black holes like Wyoming, Alaska and the Deep South.  This system, unique among the world’s nations, allows America to refocus its priorities, adding political clout to a state based not on its size or economic output, but on whether or not it produces corn. 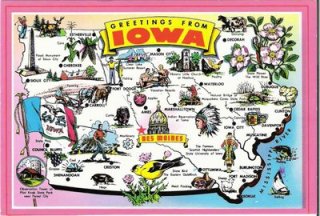 It's Not Like Iowa Has NOTHING Going For It; It's The Birthplace Of Fictional Geek Icon Captain James T. Kirk.

"Live Free Or Die?" Well, We Wish We Could Say That We'll Miss You.