bacon, batshit crazy, commercials we do not like, I Love Bacon, Jack In The Box, Jews, muslims, pig-fuckers, pigs, pork, pork is Muslim kryptonite, you got a real purty snout

Gawrsh! We Wouldn't Know What To Buy If The Man On The TeeVee Didn't Tell Us.

At least 99% of television commercials are mind-numbing horseshit. That Madison Avenue pitchmen are able not only able to part consumers from their hard-earned cash for products they want and need, but also to concoct and sell products for which there was previously no need, is a testament both to their skill and to the credulity of the purchasing public. However, occasionally these advertising geniuses use their talents to such unspeakable ends that we are forced to take notice. A recent example of this type of airwave abortion is Jack In The Box’s odious I Love Bacon.

The commercial’s premise is fundamentally flawed, assuming that the “I” watching the advertisement does indeed love the sodium-saturated snap of sizzling swineflesh.  Gentle readers, be assured that this “I” most certainly does not enjoy this artery-stuffing repast, refusing to pollute his body with the filthy swine. We have watched with growing horror as America’s ongoing flirtation with the pig has recently blossomed into romance, leaving in its greasy wake a host of bacon-themed products, including the faddishly inedible bacon sundae. 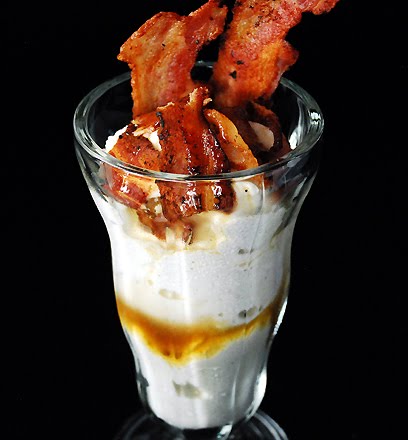 Even The Most Atheistic Of Atheists Has Got To Know, Deep Down, That This Is An Affront To God Almighty.

Moreover, this commercial may rankle those groups, most notably Jews and Muslims, whose faith proscribes pork products of any kind. These commercials will most likely not prove any more offensive to Jews (some who may secretly indulge their own love of bacon in a neighborhood with low synagogue-saturation), who after centuries of persecution have learned to discern actual threats from those matters which simply cause the bunching of panties. The Muslim community, however, has of late gained a good deal of traction from the notion that if something is perceived as offensive to the faith, then it should be seen by no one. This could prove problematic for Jack In The Box, as pig-meat is among the many, many things Muslims find ritually unclean and therefore mortally offensive. 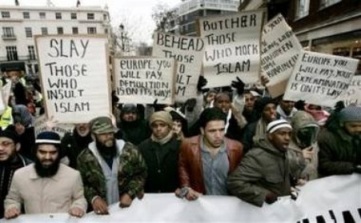 Fortunately, It's Unlike Muslims To Go All Batshit Crazy Over Someone Else's Lifestyle Choices.

It is not often we find ourselves in complete agreement with anachronistic fundamentalist wackos with nasty beards, but today is one of those rare times. By even joking about marriage between a man and a food product, Jack In The Box sets a dangerous standard. Rather than the clever commercial it pretends to be, Jack In The Box’s I Love Bacon campaign is a dangerous incitement to America’s impressionable youth, telling them it’s perfectly okay to grow up to be a pig-fucker.

8 thoughts on “You May Now Eat The Bride”