We’re Thinking That Any Kid Who Bites Into This Maybe Deserves To Be Taught A Lesson.

Anyone who’s ever gone trick-or-treating (sorry Jehovah’s Witnesses, you’ll just have to use your imaginations) has likely heard the various tales breathlessly told about tainted candy passed off to unsuspecting children. Although these ghastly stories of stranger-danger are myriad, chief among them in its capacity to fascinate and horrify the public consciousness is the legend of the razor blade hidden in an apple.

Since Kids Carrying These Will Never Accept Your Apple, You Might Just Want To Stab The Little Door-To-Door Panhandler.

As a child, you were no doubt admonished never to eat an apple received while trick-or-treating (which ignores entirely the fact that anyone who gives out apples to kids on Halloween is already demonstrably ill), as psychos were believed to have developed some new-fangled technology for inserting a blade into the fruit without marring its skin. The tales weren’t limited to blades of course, but encompassed a variety of poking and piercing implements, including syringes. Although this rumor has persisted since the 1960s (and before that in the form of poisoned rather than bladed candy), it has never been true. Never, ever, ever. Never.

So Is It Still True About Jamie Lee Curtis Being Born A Hermaphrodite? No, Don’t Tell Us–Let Us Keep At Least Something To Believe In.

That is, it was never true until 2000, when Minneapolis-based douchebag James Joseph Smith decided to breathe life into the old tale by hiding needles in the candy bars he would give to trick-or-treaters. He was jailed after at least one child was injured by the deadly confection. Not only was Smith able to transform an amusing urban legend into a terrifying reality, but he simultaneously reinforced Promethean Times‘ long-held conviction that Minnesotans are by far America’s most evil people.

True: After Narrowly Being Defeated In Minnesota’s 1932 Gubernatorial Contest, Adolf Hitler Opted To Try His Luck In German Politics.

To our friends on the East Coast: we know it’s hard for you to get information right now, but Minnesota has been saying some really shitty stuff about you on TV. Iowa told them to shut up, but Minnesota said they didn’t care who heard. We didn’t think that was cool, and just thought you should know. ∞ T.

Man, It Is So Refreshing Not Have To Make Up Some Excuse About His Politics, And Instead Simply Be Able To Say, “I’m Not Gonna Vote For This Guy ‘Cause I Hate His Crazy Religion.”

It’s no secret that joking about religion can be a dicey prospect. While it may occasionally still be safe to joke about baby-buggering bishops outside the earshot of any nearby papists (which means refraining from comment in bars, bingo parlors or AA meetings), kicking the Catholics is increasingly frowned upon in polite society. The Jews, for centuries the go-to faith for angry scapegoaters, have in the last half-century begun to push back with vehemence against all insults real and imagined. Even Islam, long-acknowledged as the most easy-going among all the Great Faiths, has begun to take a firmer hand with those who besmirch its many anachronistically inflexible tenets. It seems like nobody wants to be poked fun at any more, and doing so can cost you your job–or worse.

If Physical Intimidation Is Your Thing, Why Not Pick On The Quakers, Jehovah’s Witnesses Or Amish?–They’re Pacifists–Although They’re Tougher Than They Look.

That’s why we’re so lucky in America to have weirdo religions like the Mormons, Jehovah’s Witnesses, snake-handlers and the like. When feeling down, who hasn’t picked himself up by joking that the Mormon guy at work “probably has like eight wives?” And almost everyone has personally experienced the joy of bonding with a stranger over a simple conversation about how fucking annoying it is to have somebody come to your door once or twice a year to tell you that God loves you.

“Would You PLEASE Stop Saying That? It’s Offensive.”

But even these small comforts may soon be a memory. Kicking bizarre religions could become a quaint relic of yesteryear if these fundamentalist wackos get their way, and pretty soon we may have to start treating these fringe-dwellers like real faiths–with respect. Ridiculous!  We would rather see our daughters forced into a life of prostitution than to compromise our principles by treating a snake handler as if he were the spiritual equal of a Methodist or a Muslim. Not only is snake handling illegal in most civilized states, but its disturbing tenets fall completely outside the boundaries of what Promethean Times deems acceptable for a ‘normal’ religion. 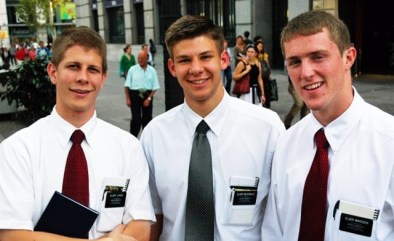 We Call Bullshit. They’re Happy AND They Enjoy Spending Time With Their Families? Just What The Fuck Is Wrong With These People?

While we believe that, without exception, tolerance should be extended to every person on Earth regardless of his or her wacky beliefs, we can’t stand Mormons because of their extreme and hateful view of homosexuality–they strongly disapprove of it. Perhaps if we outlawed their ridiculous religion they’d understand how important it is to tolerate people with differing beliefs, even those considered offensive.

Sure, We All Know That Church On Saturday Is Weird And Wrong. But If You Want To Avoid Real Trouble, Make Sure The Line Of People At Which You’re Throwing Eggs Is Coming Out Of A Kingdom Hall.

What can we say about the Jehovah’s Witnesses that we haven’t said before?  The really irritating thing about the Jehovah’s Witnesses is that when they’re mocked and the faith they hold so dear is distorted by a bunch of sneering half-truths, they retaliate by taking the time to write a nice note with a polite point-by-point response to the issues upon which there is disagreement. Some call it ‘turning the other cheek,’ but we call it fighting dirty.

Plus, They’re Cowards. When Most Other Able-Bodied German Men Were Doing Their Part To Enslave The Remaining Free Peoples Of Europe, The Jehovah’s Witnesses Decided They’d Rather Stay Home And Camp.

Although the American public still enjoys the right to publicly belittle these various zealots without fear of social opprobrium, the winds are changing. Soon, we may be forced to place these factions on par with those groups which have a legitimate history of persecution, like NAMBLA, the North American Man-Boy Love Association. Until then, we ask that other people of legitimate faiths to join us in fervently wishing that a few more of those freaks get bit by their own deadly serpents.

Serves You Right For Being Such A Weirdo.

In America, we treat all beliefs with equal respect.  You can get behind that or you can get the fuck out. ∞T.

Although They Don’t Celebrate Holidays, Every Day Is A Party For The Witnesses.

Admit it, you don’t know much about the Jehovah’s Witnesses other than that you fear them. For many, the sight of a well-dressed, smiling couple patrolling the neighborhood can instill the same fear that a gang member would. Unlike that gang member, whose interest in your house is only a possibility, the Witnesses are guaranteed to knock on your door, copy of The Watchtower in hand.

Unlike Jews Or Muslims, The Jehovah’s Witnesses Exist For You To Mock.

You may know some of the more peculiar details of the Witnesses’ faith–the failed doomsday predictions, their lack of cool holidays or Witnesses’ refusal to salute the flag. Moreover, they refuse blood transfusions and military service. Most peculiar of all, like Jews and Seventh Day Adventists, Witnesses choose to ruin their Saturday with church, rather than the accepted Western tradition of Church on Sunday.

Pull The Curtains And Turn Off The TV Unless You’ve Got Three Hours To Kill.

But most people don’t know the price the Witnesses have paid over the years for their anti-militaristic views. Their refusal to serve in World War I angered fascistic governments in Germany and the United States, resulting in persecution and imprisonment.  During the Holocaust, Jehovah’s Witnesses paid with their lives, sent to the camps along with Gypsies, Jews, homosexuals, communists and common criminals. But unlike many of the others, whose offense to Nazi Germany was tied to some immutable condition, all the Witnesses had to do to save their own lives was to shut up about the Holocaust. Contrarians to the end, they refused. Their devotion was such that SS captains implored their lethal stooges to be as fanatical as the Jehovah’s Witnesses.

You Had No Fucking Idea, Did You?

Lastly, everyone must agree that given the Witnesses’ literal belief that only 144,000 souls will be admitted to heaven, it’s pretty generous of them to go door to door every week. With such a small number of the elect slated to make it into heaven, a Jehovah’s Witness puts his or her spot in jeopardy with every knock on the door.

The Witnesses Politely Told The Nazis To Enjoy Relations With Themselves.