Recent discoveries have confirmed scientists’ long-standing fears regarding the dangers sharks pose to humanity.  Evidence from this research suggests that the threat of shark-on-human violence has never been more prevalent than it is today.  Several disturbing trends point to not only an increase in anti-human behavior, but also evidence of a of sophistication and coordination among the shark community far more advanced than what scientists had previously believed.

He May Look Cuddly, But In Reality He Is A Killing Machine.

The popular image of sharks in the public’s conciousness has undergone many transformations in the nearly forty years since Peter Benchley’s Jaws was first published.  Originally poorly-understood as mysterious and perhaps even supernatural sea monsters, sharks began to be seen as soulless eating machines in the wake of Benchley’s thriller and the Stephen Spielberg-helmed film it inspired.

More recently, led by shark apologists such as Benchley himself, the public perception of these creatures has softened, now depicting these blood-maddened killers as complex alpha-predators, the shark being not a monster to be dreaded, but a necessary spoke in the great wheel of life.

For years, critics have charged that this approach was naive and even dangerous.  Science may have bourne them out.    Recent film evidence shows sharks have begun stalking kayakers.  Even more chilling is the observation by scientists in South Africa that sharks select their prey in a manner similar to that of human serial killers.

A recently discovered photo may be the tipping point in the public consciousness, the final insult which will force humanity to stand up and take notice of the oncoming threat.  The photo appears to show some sort of terrestrial shark–or landshark–preparing to devour former celebrity and current Canadian Dan Aykroyd: 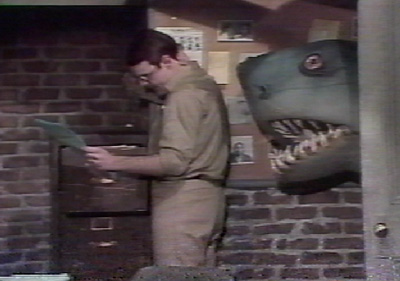 Until recently, the sharks have been content to take humans in ones and twos.  Incontrovertible evidence shows that their attacks are becoming more bold, and that sharks show increasing signs that they are set to rise up in a united show of force.  Humanity’s bloody reckoning increasingly seems like a when, and not an if.

Humanity has the numbers; it’s not yet too late to stem the tide of the sharks’ toothy advance.  However, only when the world reaches a fever-pitch shark hysteria as it did in the weeks following the premier of Jaws, will society be taking this threat for what it is worth.  The longer this awakening is delayed, the smaller the chance that humanity will be ready for the Dorsal Dawn.

It’s axiomatic that a film is never as good as the book which spawned it.  The cinematic dustbin is jammed with book-to-movie abominations such as Watchmen, The Scarlet Letter and Oscar-winner, The Cider House Rules.

Occasionally, however, a certain confluence of creative people (producers, directors, actors, etc.) conspire to create a film that is in every way superior to the sum of its parts.  Following are a few examples of films which are superior to the written work which spawned them.