It's Hard To Look Dignified With A Ferret Humping Your Upper Lip.

The town of Gainesville, Florida saw in deranged fucknugget Terry Jones a way not only to pusillanimously distance itself from the controversy engendered by the pastor’s threat to burn several copies of the Koran, but also to pad the city coffers with some much-needed cash.  The ‘gator-infested mosquito farm-with-a-zip code presented Jones a bill for the security the city had hired in the event of violence.

By hitting the Reverend with a bill he almost certainly could not pay, Gainesville found a way to tell rest of the world–the Muslim world in particular–that it does not tolerate free speech when that so-called free speech upsets such a large group of sensitive, and more critically, violence prone-individuals.  The good folks of Gainesville joined legions of other self-loathing Americans who not only rightly decried Jones’ plans, but became venomous in their efforts to prove that they stood on the correct side of popular opinion.  Most surprisingly was the nearly universal (at least insofar as the media was concerned) agreement that burning the Koran was a taboo surpassed by few others, the insinuation being that the Reverend knew that he had passed the accepted limits of free speech. 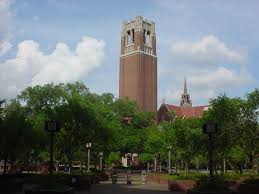 Gainesville: "We Don't Want No Trouble, Y'all."

Although Jones failed to follow through on his threat, the uproar caused by the nonevent did result in the bunching of panties throughout the Arab world.   Several people were killed in rioting even after it was announced that no Korans would be harmed.

There Are Many Similarities Between These Guys And The Tea Party. The Difference? The Media Isn't Too Pussy To Mock The Tea Partiers.

Given that freedom of expression is ostensibly one of America’s most cherished rights–the Founding Fathers having apparently thought so highly of it that they chose it to kick off the Bill of Rights– it might be expected that Americans would grudgingly rally to Jones’ defense.  After all, how often in America does some self-satisfied prick serenely mouth the platitude so often misattributed to Voltaire: I may disagree with what you say but I will defend to the death your right to say it? 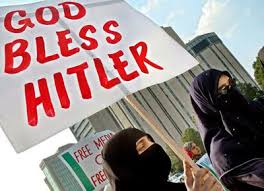 Add to this America’s proud history standing up against religious calls for censorship.  When Martin Scorsese released his brilliant 1988 film, The Last Temptation of Christ, which the Catholic Church condemned as blasphemous, Americans made the choice for themselves.  The following year “artist” Andres Serrano photographed a crucifix suspended in a jar of his own urine, calling it  Piss Christ and himself an artist.  Christians across the globe were offended at the image of their Lord and Savior swimming in a vat of piss, but American values of free expression permitted cooler heads to prevail.  When Cagney and Lacey was taken off the air in 1983, the people would not have it; the gals were back long enough for a grateful nation to watch Tyne Daly begin to plump up.

Relax, Christians: It's Only Your Lord And Savior Bathed In Urine. You Can Either Respect The First Amendment Or You Can Threaten To Blow Shit Up.

In the face of histrionics from Muslims worldwide and self-righteous head shaking from the rest of the globe, America’s public response was a firm and immediate denunciation of Jones.  Watching pundits and try to one-up one another with contrived indignation became a sport.  By the time President Obama summoned his inner Neville Chamberlain to act as a sort of Appeaser-In-Chief, Jones had no choice but to back down.  That he did is unquestionably a good thing.  That he was bullied so shamefully into it by the media and his government is not.

The Taliban Thought These Historical Religious Carvings Were An Insult To Allah.

The Reverend Jones is unquestionably an attention-hungry con man–more PT Barnum than Jim Jones, whose actions should rightly be castigated.   But  a large segment of those shouting the loudest in this argument miss a larger point.  Although Jones may have talked about burning the Koran and more than likely intended to do it, he didn’t actually do it.  Jones has been punished not for an action which outside of Sharia Law would have been legal anyway, but rather for an unpopular thought.

STOP! Is That A Koran? Sorry, Our Bad--Carry On.

Free speech still exists in America, but only for those with nothing to lose.  The old quote needs to be updated: If I disagree with what you say I will hound you to death should you say it.

9 thoughts on “I Disagree With What You Say, And I Will Ruin You If You Say It.”