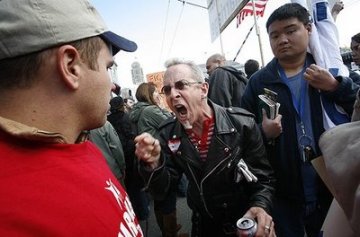 It's Sometimes Difficult To Take Bad News With Good Grace.

Who’s taken all the gay from the Bay?  The question has haunted the fog-shrouded streets of San Francisco since last January’s gay audit, in which the flamboyant city suffered a humiliating downgrade.

Honey, Please--Don't You Read The Papers? We've Got Real Problems.

In a nationwide survey, gay-themed magazine, the Advocate, tested the gayness quotient of several American cities.  San Francisco, or ‘Frisco’ as locals lovingly call it, came in a disappointing 11th, behind such gay meccas as St. Louis, Pittsburgh and America’s #1 gay city, Minneapolis.

SF's Got Its Panties All Up In A Bunch. That's No Easy Feat With Studded Leather.

This unhappy news struck San Francisco’s hometown homos like an unlubricated fist, leaving many with feelings of betrayed resentment.  Activists are quick to point out that without San Francisco’s brave example in the 1960s and 1970s, gay people might not find the top ten cities quite so hospitable today.   This view fails to take into account that the public has the memory span of a syphilitic goldfish.

It's Not The First Place We'd Look To Find Gay People.

Controversy aside, the study has provided data which shatter preconceived notions about gay life.  The fact that cities like Cleveland, Pittsburgh and Oakland are among the top fifteen cities in the nation that homosexuals call home effectively puts an end to the degrading stereotype that gay people only live in nice places.

Relax. No Matter What Happens To The City, You'll Always Be The World's Gayest Baseball Team.