While the old folks couldn’t agree on the name of that long-ago stranger, they accorded that his aims had been righteous and his grievances valid, ignoring that those had been their aims and grievances too.

In half-remembered youth they had gathered mutely on the Common as the stranger and his grim company strode past like avatars of the gods come to deliver them from misfortune.  They crept like lingering shadows behind the small band to the Big Man’s house.

There they watched as the Big Man’s gunmen cut down the stranger and his party like dogs.

It doesn’t matter if he’s praying or pissing; a knock-off Calvin on your car proclaims far and wide the staggering size of the ass capable of supporting an asshole like yourself. 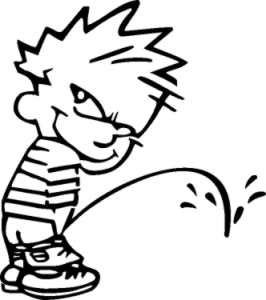 Show The World You Support Copyright Infringement By Purchasing This Delightful Image Of Calvin Pissing On Bill Watterson.

So really, you’re not just an asshole, but also a thief.  Way to go, cock-goblin.