In The Beginning, Don Created GI Joe, And Saw That It Was Lucrative.

Children love to hear Bible stories, and those from the Old Testament–when Jehovah was still doing a lot smiting–can be some of the most exciting.  One thing kids like even better than hearing Old Testament Bible stories is reenacting those stories with grotesquely-proportioned Biblically-themed action figures. For years such a product remained elusive.

"He Maketh YOU Lie Down By Still Waters, MoFo!"

Now that gap has been filled with for-profit prophets: Enter The Almighty Heroes!

Carrot Top Had Second Thoughts About Selling His Likeness For Use As A Toy. But Who Could Say No To Those Breasts?

These evangelical avengers are the brainchild of Donald Levine, the creator of the original G.I. Joe.  Levine’s company, Almighty Heroes Media Group, was created to address a toy shortfall in the Christian marketplace.  Not at all ironically, Levine is Jewish.

"Gosh, Davey--I Think It's Super That You Learned A Very Valuable Lesson. But I Meant It When I Said I'd Tear Your Throat Out If You Pulled That Shit Again."

Some people might think it a tad vulgar to so shamelessly profit from a religion of which he isn’t a member, but Levine’s defenders are quick to add that all these Old Testament characters are very much a part of the Jewish tradition as well.  It’s not impossible that Jewish parents might buy Almighty Heroes for their children.  “But what, they’re gonna waste their money on this crap?” Levine says.  “What?  I’m joking, I’m joking.  The sense of humor on this guy!  Unbelievable.”

Billy Just Loves To Play Samson. His Favorite Part Of The Story Is When Samson, After Having His Eyes Put Out And Cast In Chains By His Philistine Captors, Gains His Revenge By Pulling Down The Temple Atop His Enemies In A Gruesome Murder-Suicide.

Moreover, Levine is quick to point out that products such as the Goliath Electronic Sword and the Jonah & the Whale Playset help kids get into the Bible by allowing them to add their own awesome adventures to the Inviolable Word of the Almighty. 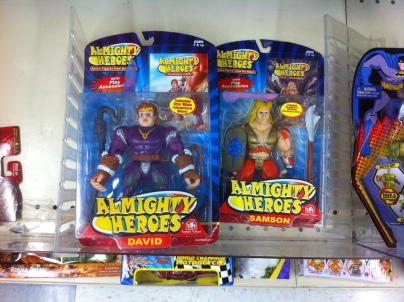 Batman Wants Nothing To Do With These Jokers.

Sadly, Levine’s company has not fared well, perhaps cursed by the unseen hand of Satan or possibly good taste.  Almighty Inc. has been unable to pay back loans, and Levine is being sued by one of his former partners.  But like the resilient heroes who are their flagship characters, don’t count Almighty Inc. out just yet.  The photos of the David and Samson action figures in this story were taken yesterday by Promethean Times’ staff photographer Tardsie the Backpack.  They are available at our local Rite Aid.

It's A Little Weird To Think That The Psalmist Looked So Much Like A Fuck Doll.