Before You Say This Thing Is A Shameful Waste Of Resources, Ask Yourself: What If The Senior Prom Were Held Atop Mt. Kilimanjaro?

From 1992 until 2010, the Hummer was the most talked-about vehicle on the roads.  The massive SUV, General Motors’ civilian version of the US Military’s High Mobility Multipurpose Wheeled Vehicle, or Humvee, was an object of admiration to off-road enthusiasts and to environmentalists, a garish icon of American rapacity.  Although there remain a great many of these automotive behemoths on the road today, GM discontinued the line in 2010, and “Hummer” is quickly returning to its origins as a euphemism for oral sex.

This Oversized Child's Toy Reminds Us That You Can In Fact Have Too Much Money.

The Hummer has but two uses.  It is a powerful and durable all-terrain vehicle, the perfect utility for that small percentage of the population which finds itself in conditions so inhospitable that such a conveyance is necessary.  Or, it can serve as an artificial manhood for pitiable pencil dicks with good credit and a dearth of brains.* 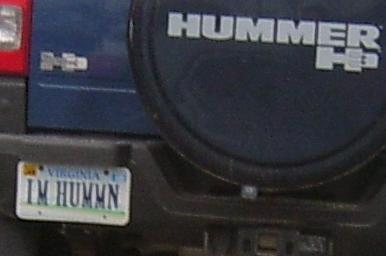 IM HUMMN. Translation: "Ladies: Not Only Would I Like You To Believe I Am A Virile Sex-God, But Also That I'm Quite Witty."

Either way, a Hummer without a personalized plate screaming “Look At Me!” just isn’t a Hummer at all.

Let The Other Drivers Know That Your Precious Cargo Supersedes Their Selfish Need To Arrive On Time.

Statistics back it up: despite millions of new cars on the road ever year, the highway is becoming a safer place worldwide.  The reasons for this happy trend are myriad, among them: improving infrastructures, increased awareness about driver’s safety and stricter laws regarding intoxicated driving.  No factor has been more significant in lowering automobile deaths per capita than has the rapid development of safety technology.  It is possible today to walk away from an accident which might have proved fatal only thirty years ago.

But in today’s world of bleeding edge technology and gee-whiz science, is there still room for an old standby like Baby on Board?

Because Children Stop The Traffic.

Baby on Board proved to be a dazzling innovation in automobile safety when it was first introduced in the heady years of the late 1980s.  Moreover, by being extremely cost-effective–individual units cost pennies to make, but retailed for as much as $10–the safety measure meshed nicely with the era’s affinity for recklessly high profits.

Translation: "Honorable Godzilla: As There Is In This Car A Young Child, It Would Be Most Pleasing To The Child's Family If You Could Contain For A Few Moments Your Cretaceous Rage And Avoid Incinerating The Child With Your Radioactive Breath Or Smashing It To Dust With Your Magnificent Tail."

More than simply keeping costs down, the innovation’s simplicity appealed to the consumer.  Baby on Board came ready-to-use, the unit taking typically no more than a few seconds to install in the vehicle’s rear window.  Once mounted, the device would alert other drivers that young people (despite its name, Baby on Board applied to all children weighing less than 80 pounds) were in the vehicle.  Those drivers would then heed this warning, waiting until the precious family was safely in the distance before resuming their reckless driving.

Literalism Is Neither Cute Nor Helpful.

Sadly, Baby on Board is rarely seen today.  21st Century drivers are more likely to place their trust in expensive technologies, and given the level of scientific innovation in safety this reliance may be well-founded.  But it’s worth remembering the recent studies which show Baby on Board is at least as efficacious as are child safety seats.