The public’s flaccid attentions twitched briefly in response to a recent viral video from China which shows a very young girl navigating an SUV on a busy street.  Although condemnation promptly issued from the four corners of the globe, Chinese officials admitted their hands were tied:

Local police spokesman Li Xiaobin revealed that there was very little they could do, under Chinese law.

“Kids absolutely are not allowed to drive,” he said. “However, as for drivers under 14 years old, we can’t give them tickets.

This is a surprising admission of powerlessness from China, which only twenty years ago set a shining example to the world as a paragon of tyrannical repression, a bloody trail of tank-mashed protesters to prove it.  However, in keeping with the spirit of the old China, one unnamed official did mention the possibility of re-education for the child’s parents.  Re-education, it should be noted, is one of the myriad Chinese euphemisms for “torture and likely execution.”

Some experts caution that the affair is overblown.  According to Dr. Emil Haagerdäddi of the Council for Responsible Asian Steering Habits (CRASH), “Studies have shown that the average Chinese citizen demonstrates all the driving skill of a hydrocephalic monkey with a bad crack habit, so a bright four-year-old behind the wheel could only be a boon to public safety.” 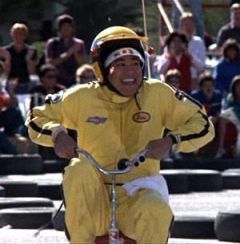 A More Serious Threat To Pedestrians Than You Might Think.