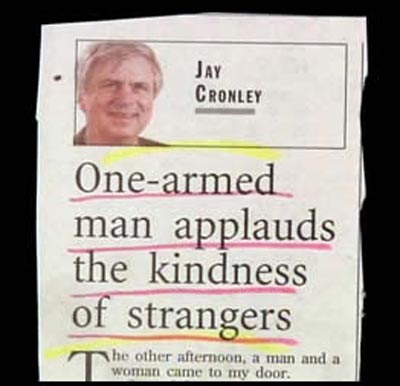 Is THAT What He’s Doing? Guess We’ll Stop Waving Back.

In which we get all the information we need from the headlines of the day:

Poor reading could be fatal ~ Oh, come off it. We’re as pro-literacy as the next satirical internet blog, but that’s just ridiculous. With the possible–and hilarious–exception of “Warning Sign Disasters,” this simply isn’t true.

Why Thursday’s sunset will be special for Seattle ~ No more sun ’till 2013.

Iwo Jima, The Translation Of Which Means “Sulfur Island,” Is Currently Uninhabited.

Rick Santorum winning more support from Republican women ~ There’s proof of gender equality for you, folks. Women are every bit as stupid as men.

IS BRAZIL DESTROYING THE AMAZON FOR ENERGY? ~ Well, that would be a good reason, anyway,–better than ‘Just ’cause they felt like it.”

Whatever Happened to First Class? ~ It’s still there–just not for you, peasant.

What You Lose When You Sign That Donor Card ~ YOUR PRECIOUS ORGANS!

Jennifer Love Hewitt loves her boobs ~ In this, we are united in our affection.

What We Like Best About Them Is Their Pleasing Shape And Size.

Prostitutes found in Mexico jail ~ Imagine that.  If you wanted to surprise us, you’d have said ‘soap.’

What’s Wrong With Being Single? ~ Only a loveless grotesquery would pose such a question.

Dad: Drug classes should be mandatory ~ We agree. The younger generation simply does not know how to do drugs properly.

Another child left at Chuck E. Cheese’s ~ You say it like it’s a bad thing, like dad abandoned his kid in the deep, dark, wolf-ridden woods. But at Chuck E. Cheese’s, the kid’s got a fighting chance. He can live in the moist darkness beneath the ball-pits like some pizza-house Gollum until he latches on with a new family.

Wait! It Just Got Interesting.

Peter, Paul & Mary bassist dies ~ If you’re not Peter, Paul or Mary, in death you shall be remembered only for the instrument you played.

Is 14 too young for life in prison? ~ Fuck yes it is. What kind of idiot even has to ask?

The pain of being disinherited ~ You don’t get any money when Mom & Dad die!

How to handle an elderly loved one that won’t bathe ~ It involves the Jaws of Life and a high-pressure hose.

Few Things Are As Taxing As Caring For A Dirty Old Man.

Most food illness imported ~ Sad. Truly sad. We never thought there’d be a day America would have to import botulism.

Guess what almost killed ‘the Tiger Man of Africa’ ~ Was it a lion? A hippo, then! Damn, these things are hard.

Executed killer shouts ‘Go Cowboys!’ ~ And all the witnesses shouted “THE DEAD LIVE!” Or did you mean “Soon-To-Be-Executed?” That’s probably what you meant.

Does car tell your politics? ~ No, the feeble-minded bumper sticker on the back does that.

“No, It’s Great. By Adopting An Inflexible Attitude In Lieu Of Knowing The Issues, I Save Time By Not Having To Think About The Tough Stuff.”