I taught for a few years after college before making a career change to sales. The two fields are not so dissimilar as you might at first believe; the best teachers are salesmen at heart, I think, labelling their product ‘knowledge.’ As my life began to ebb toward one of responsibility and potential maturity, I viewed the career switch–erroneously, it seems to me now–as an almost necessary rite of passage into adulthood. The first thing you should understand is that I believed I needed this job, and made every effort to convince my new employers that I was Joe Corporate.

The other thing you should understand is about my friend Dave Chen–he’s not at all stupid. If this weren’t already apparent from his ethnic heritage (Asians don’t come in ‘dumb’; folks, you can call me a racist if you like, but only if you have ever personally encountered an unintelligent Asian–and no, Filipinos don’t count), it would be after talking to Dave uninterrupted for a few minutes–at his core, he’s an intelligent, thoughtful guy. 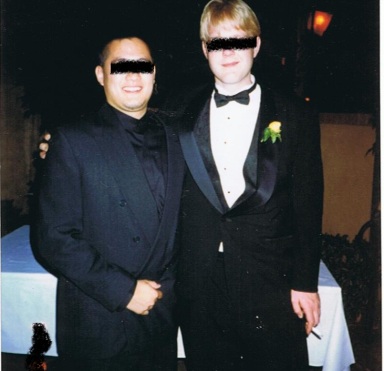 But despite his intelligence, Dave wields stupidity like a weapon, having long since learned to use it to his advantage, preferring to look the fool to achieve his own ends. In school there wasn’t much that Dave couldn’t get out of by pretending he was clueless.  Twice  Dave “forgot” to knock and barged into my apartment, once lucky enough to catch my girlfriend while she was changing. Even though I had long since become hip to his game, his sinister super stupidity power made it impossible to get mad at him. “Oh, Dave…” was a familiar refrain in our group.

But sometimes Dave’s affected stupidity will the better of him, as events conspire to erupt in hilarious or tragic (and sometimes both) consequences. Once such time was shortly after I got my new corporate sales job.

Although the job was in Washington State, I was sent down to LA for training, which was ideal, because many of my college friends still lived in the Southland, and I hadn’t seen them for a few years. Dave was one of many friends I planned to see.

One night, a few days after I’d arrived in Los Angeles for training, I had gone out in the evening with a couple of college friends. When I returned to my hotel room, my roommate and fellow trainee Justin (yeah, roommate–I was quickly to discover that I was working for one of the most penurious companies in the Western Hemisphere) told me that while I was out, I’d received a call.

“Who was it?” I asked, walking up the stairs to grab a shower.

I stopped dead in my tracks when he answered “Dave,” not completely sure why I was gripped by such a sense of mounting dread.

Justin’s chuckle didn’t reassure me. “Well,” he said, “For about the first minute of the conversation, he thought I was you.”

Oh, He Isn’t Even Warmed Up Yet.

Justin laughed again. “He mostly talked about dusting huge bowls {partaking in the consumption of marijuana, a harmful and highly addictive narcotic}.”

Before I could protest that I didn’t know what that meant or say something ridiculous like “I never inhaled,” Justin assured me that he didn’t care and wouldn’t mention it to our corporate masters, and that moreover he’d even smoked pot once or twice.

I told him that my experience with the pernicious drug had been equally infrequent, and asked him, if he should happen to talk to Dave again, not to mention that he’d told me about the conversation. He agreed.

A few days later, after we’d gotten together and dusted a few of the aforementioned huge bowls, Dave asked me, “So how’s training going?”

I grew very serious, and cast my eyes downward. “Not good, Dave. I got fired.”

I told Dave that I had reported for training as usual that morning, but that my instructor had held up class to speak with me privately. “She asked me point-blank if I’d ever smoked pot,” I told Dave. “I said, ‘Once or twice in high school, but not since.’ But Dave–they fired me anyway.”

But Getting Shitty Drunk With The Boys From Corporate Was A-OK.

Dave had the good grace to look stricken. “So how did they find out?”

“That’s the thing I don’t understand,” I said. “It makes no sense. The nearest thing I can figure is that one of my Washington buddies called corporate as a joke. It wasn’t very funny, though.”

We sat in silence for a while before Dave spoke again. “But you really don’t have any idea who it was?”

I affected the most touching look of bewildered hurt I could muster. “No, man–not a clue.” 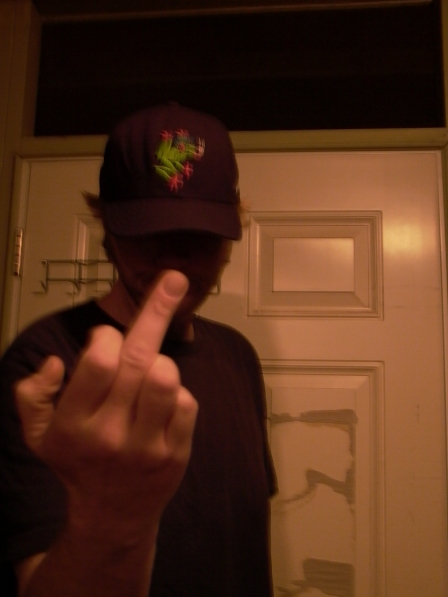 Thanks, Buddy! It’s Great To Know You’ve Got Our Back!

Dedicated to my friend and brother, Dave “Chen.” Hope you got an eyeful, pervert! ∞T.