Promethean Times regrets that our clumsy handling of a recent event necessitates both a clarification and an apology.  We have entered an age in which our words take on meanings not originally intended, and where the line between free speech and incitement has grown perilously thin. 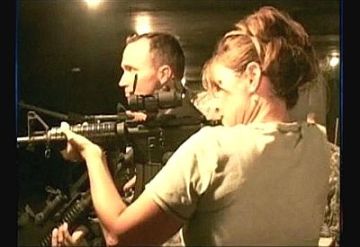 Sarah To Kate: “RUN, BITCH! RUN!” By Which She Means ‘Run For Elected Office.’ Sarah Thinks Kate Is Just Swell.

Recent violence in the United States compels us to reexamine a December 27th Promethean Times piece, Plan To Strand Palin, Gosselin In Alaskan Wilderness Unsuccessful.  In the aforementioned piece, we depicted a gun-toting Sarah Palin above the caption ‘Many People Hoped That This Image Would Be The Last Thing To Go Through Kate Gosselin’s Mind Before The Bullet.’

We’re confident most readers understood that our intention, however ham-handed in its execution, was to express the hope that an image of her friend Sarah Palin went through Kate Gosselin’s mind rapidly–as in, with the speed of a bullet. We did not mean to imply or depict, as some readers clearly believe, any intended violence from Palin toward the talentless reality star.  This erroneous assumption is bolstered by our choice of image, and in this, we probably chose unwisely.  If we had to do it again, would most likely not choose a picture of Palin with an automatic weapon, and definitely not one in which the former vice-presidential candidate is taking direct aim at the viewer.

We want to be perfectly clear: the error was inadvertent.  Although as a staff we are stunned that anyone would believe Promethean Times capable of such a gross breach of our journalistic responsibilities, we acknowledge that through our own actions, we bear at least some culpability for the confusion.

“I’ve Got A Shotgun Shell Here With Kate’s Name On It. As A Present, Of Course. I Did The Engraving Myself. You Betcha!”

We very  much regret that Promethean Times‘ ambiguous phrasing caused alarm among a portion of our more sensitive readers, and in the future will endeavor whenever possible to eschew confusing, convoluted–and seemingly interminable–sentences which, through their various levels of syntactic abstraction not only serve to baffle a reader, but also sorely test his or her patience with the writer’s self-indulgent, pointless and increasingly wearisome verbal prestidigitation; instead, in such situations where previously we might have employed so confusing and unnecessarily-elaborate a syntax, we henceforth shall strive mightily to use only the most concise, clearly-worded and straightforward sentence structure in both the hope and belief that in doing so, such plain grammar will not only help to mitigate the very real possibility of further confounding the reader and thereby abrogating our journalistic mandate to effectively impart an intended message, but also–and by no means less importantly–to be more thoroughly satisfying for the reader.