Although much has been made of the danger posed by birds, sharks and aquatic mammals, humans have long been tolerant, and even affectionate toward bovines.  Regarded as likable, if stupid creatures throughout the world, and revered in places like India, the bovine family is accorded a respect second only to that given to canines. 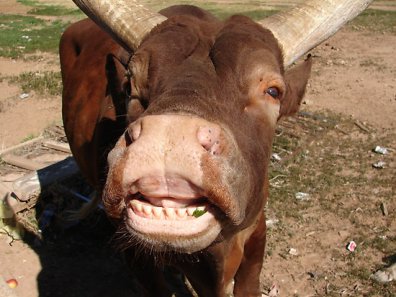 A recent incident in British Columbia may put bovines’ most-favored-species status in jeopardy.  Last week an eighteen-year-old bull rider, Makwala Derrickson Hall, was struck in the side by a bull during an event.  Derrickson Hall died before medical help reached him.

There are many theories that seek to explain why the bull went rogue.  An early theory, quickly discarded, imagined the incident as an unfortunate accident, adding that when dealing with wild animals, occasionally something terrible will happen.

Most experts consider this explanation childishly simple at best, and at its worst, dangerously naive.  Professor Emil Haagerdäddi, chairman of South-Central Montana Community College’s Department of Rodeo Studies, believes that the bull didn’t recognize the rider as a professional.  Says Haagerdäddi:

“Derrickson Hall had two disadvantages going into this contest, neither of which was his fault.  The first, obviously, was his Canadian citizenship.  I don’t know how many times I’ll have to say this: Canadians have no place in rodeo.”

When asked how Canadians will react to his statement, the professor sighs, “Oh, there’ll be a burning maple leaf on my lawn tonight.  It won’t be the first time.”

“Derrickson Hall’s second and more pronounced disadvantage,” the professor continues, “Is his unusual last name.  He’s got one too many.  In rodeo having two first names is so common place as to be de rigueur.  I can’t tell you how many Jesse Lees and Billy Joes have strapped on the spurs, but not too many Derrickson Halls.  And Makwala?  Well, you just can’t expect the bull to respect that, now can you?”

There are a great many others, however, who feel that this is more than one rogue bull trying to make his bones.  One organization which believes this way is NO BULL, a pro-humanist charity.  NO BULL’s spokesperson pointed to the alarming rise in goring, both among matadors in the bullring as well as idiots who participate in Spain’s famed running of the bulls.  “We feel that these recent events are not accidental, and that they are being directed by an unseen hoof.”

This Kill-Crazy Beast Ate Its Way Through Three Riders And Nine Rodeo Clowns Before It Was Finally Brought Down.

It’s too early to tell if bovine-on-human violence is a growing trend or merely a series of unfortunate coincidences.  Until we know for sure, it’s all eyes on the cows.