Promethean Times continually strives for accuracy in reporting, employing stringent fact-checking procedures which rank among the best in the industry.  Despite these precautions and our best intentions, we are subject to the same human failings as are all journalists, and will inevitably be guilty of occasional small errors.  It remains our policy whenever possible to promptly redress such errors. ∞T.

Because The Big Top Wouldn't Be The Same Without Her.

Tina the Circus Elephant did not die mysteriously last week, as reported in Promethean Times.  The animal carcass found on the side of Route 9 turned out not to be an elephant at all, but rather a horse.  By the time authorities arrived on the scene, several local idiots had gathered with hammers, tire-irons and other household clubs, with which they then proceeded to bludgeon the flyblown mess.

They promised to stop.

“We thought if we hit it long enough, some funny might come out of it.  Our bad.”

Callipygian sexpot Kim Kardashian unveiled her long-awaited signature scent to an eager public last January.  That the ambulatory pair of buttocks would seek to profit from her musky vapors is neither surprising nor particularly blameworthy; that America’s dulled cultural palate has allowed KK to stink up the aisles of Wal-Mart and Target stores nationwide eleven months later is. 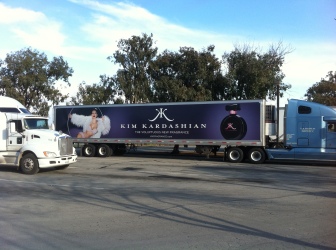 Considering The Product's Demographic, It's Most Likely Aimed At Classy Lassies With Expansive Chassis.

As readers of Promethean Times already know, Kardashian is the ninth most beautiful woman in the world.  It is likely for this reason, and not because of the perfume’s quality, that Kardashian’s pungent secretion is so highly prized.

Katy Perry, thought to be the world’s most beautiful woman, has her own signature scent, Purr.  People who like that kind of crap call it “a bewitchingly bold aroma, infused with the twin scents of desperate tears and moist muppet fur.”

Why doesn’t Kim throw an extra ‘K’ word onto ‘Kim Kardashian’ to give the perfume’s name a further level of alliteration–say, ‘Kim Kardashian Kologne?’