We Were In Attendance At One Wedding Where The Minister Said “Awful Wedded Wife.” No Foolin’.

It’s a truism that something always goes wrong at a wedding. Usually it’s something small (or several small somethings), but other times the happy event can descend into a scene straight out of the Jerry Springer show. The story that follows falls somewhere in the middle.

Not long after I graduated from college, my friend Ramon asked me to be in his wedding. Ramon was my ‘little brother’ (a fraternity designation; I have no natural siblings), despite being about three years older than I was, and had actually managed to land one of our professors–a sizable victory. The wedding was to be held in some high-toned winery in Napa, California. The wedding would be a dignified affair, with a great many guests from both sides. 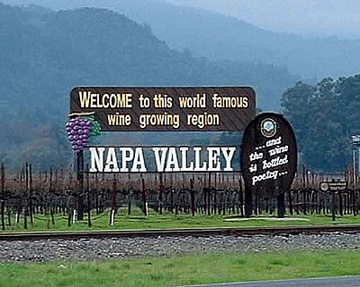 Napa: A Classy Place For A Classy Shindig.

However, one of the guests brought marijuana brownies to the party. Significantly, this first-time chef had improperly followed the recipe, and had inadvertently created super-brownies. It’s impossible to say just how many guests helped themselves to brownies, but it was at the reception when the affair quickly began to go south.

It started when a couple of guys from my frat convinced the wedding photographer to take a few pictures of them pressing their naked asses to the windows of the reception hall, displaying their matching tattoos for all the world to see. I was talking with Ramon when all this went down.

It Turns Out There Is Such A Thing As Too Much.

In the middle of my conversation with Ramon, his hot little sister broke in and began speaking to him rapidly in Spanish: ‘Taco burrito chimichanga, guacamole por favor!’ Ramon’s face darkened as he answered, ‘Tostada margarita, tortilla no bueno!’

He turned to me. “Do you know anything about people showing their tattoos?” But before I could answer, a knot of angry voices rose over the din of the party–Maureen, Ramon’s new bride, had just heard about the photography snafu. Maureen had lived on the West Coast for over ten years at this point, and as a professor, had struggled mightily to rid herself of her braying New Jersey accent. Now, more than a little drunk and entirely pissed off, the Jersey Girl buried deep within Maureen began to assert herself with a vengeance, “What the fuck is goin’ on heah?” she bellowed.

Love Sometimes Takes Us To A Strange Place.

By the time Maureen was halfway pacified, we had bigger fish to fry. Our buddy Mike had apparently gobbled one too many brownies and had become convinced that the brownies were laced with LSD. For the rest of the evening, a twitchy, barely consolable Mike insisted that he’d been dosed. Mike would experience brief periods of lucidity when he would appear to be convinced that the brownies contained nothing more than an overabundance of cannabis. Then, slyly, he’d ask, “So how much acid is in these brownies, anyway?”

Finally, when my responsibilities were through, I managed to sneak away to my hotel room and collapse wearily onto my bed. Although I was beat from a long, grueling day, I took some satisfaction at least that my brownies were a big hit.