Perhaps it is the aphrodisiacal rush of power which causes influential men to stray from their spouses, or it may simply be that the oversexed are compelled strive for positions of power.  Either way, the truth is the same: Great men chase a lot of tail.

34th US President Dwight D. Eisenhower was no exception.  An inveterate skonk, Ike was constantly on the hunt for beaver.  Among his many conquests, however, were some shaming defeats.  Perhaps the most ignominious of these was his failed seduction of activist Helen Keller.

Ike Thought He'd Get More Traction From The Line, "You Won't Get Pregnant If You Can't See It Coming."

Conventional wisdom warns that TIME‘s annual Person of the Year award is so iconic as to render superfluous any imitations.  However, as it has so many times before, Promethean Times eschews the expected by boldly forging a new path, in this instance by appropriating TIME‘s 80-year-old tradition.

Did You Know? TIME Was Once Known For Journalism, And Was Considered More Newsworthy Than Its Current Contemporaries, People Magazine And Martha Stewart Living.

The decision to bestow Promethean Times with this highly coveted accolade did not come easily.  A great many individuals and events helped to make 2010 one of the most dynamic years on record.

There was Julian Assange of WikiLeaks, and traitorous American soldier Bradley Manning, who assisted in the appropriation of several documents.  There was BP’s disgraced Tony Hayward, whose reputation in tatters, has only his fabulous wealth to console him, and Bernie Madoff, although convicted in 2009, still managed to keep his name in circulation.

US President Barack Obama rammed through feel-good policies to be billed to posterity and the people loved him for it.  The press, however, seemed to recover from their embarrassing love affair with the Chief Executive, quixotically alternating hot and cold by one day proclaiming the President a lame duck, and the next heralding him as the greatest president since Franklin Pierce.

One Of These Kids Is More Popular Than The Other.

Much as a leech would, Congress eagerly clung to the President’s agenda, but lacking the President’s (or any, largely) personal magnetism, found itself the victim of what the press liked to call “an anti-incumbent agenda.”  Former Speaker of the House Nancy Pelosi realized too late that a sunny smile does little good when it’s the handiwork of San Mateo’s finest Face & Boobs man.

Then there was the Tea Party to consider.  The completely leaderless grassroots organization, headed by terrifying Campfire Girl Sarah Palin and funded by deep-pocketed partisans, managed to drive the few remaining moderate Republicans from the GOP.  This end was aided by the Republicans’ skill at figuratively fellating the Religious Right, although the Democrats made a game and creditable attempt at it.

Pretty-like-the-prom-queen huckster John Edwards imploded earlier this year, terrifyingly reminding people ignorant of Spiro Agnew that America came “this close” to electing a scumbag as vice-president.  Edwards’ estranged wife Elizabeth, long regarded as a dismissive, cold-hearted bitch, received secular canonization upon her recent death, and has been retconned into a nurturing, saintly person.  She got cheated on and she died?  Tsk.  You will be missed, Elizabeth. 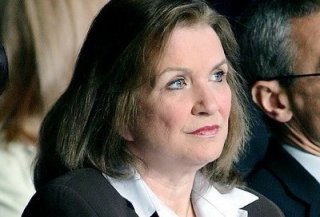 Finally! Someone Faced A Debilitating Illness With Courage And Dignity. Don't You Wish Elizabeth Had Been Your Mom?

Former President George Bush was also considered for Person of the Year due to his lasting influence on the country, and on the Democratic Party in particular.  Until the weeks preceding the November elections, Democrats were so enamored of the former Republican Chief Executive that the words ‘George W. Bush’ comprised 25-35% of the typical Democratic fundraising speech.

Fugeeman responded to the Haitian earthquake with the aplomb and statesmanship one would expect from a Caribbean head of state; he announced a presidential bid which then unceremoniously petered out.  We also gave some thought to the Devil, who many experts, including noted theogeologist Pat Robertson, believe to be the ultimate author of the devastating Haitian Quake.  The UN deserved some consideration as well, despite that the global organization’s response to the Haitian Crisis was characteristically bungled and that it continues to counter both African genocide and rogue nuclear states with the twin forces of hand-wringing coupled with laughably empty threats.

The Machinations Of This Evil Genius Bedevil Us Still.

We considered several despots, including the scrappy madman Mahmoud Ahmadinejad of Iran, who holds in equal contempt mullets and the Jews, and the comically diminutive Kim Jong-il, North Korea’s dying tyrant, who continues to terrify an impotent international community with his bellicose shenanigans, and who elevated his special-needs son to the #2 spot in the impoverished third-world hellhole.  And although he had a comparatively mellow 2010, ‘Lil Kim and Mood the Dude’s Axis of Evil amigo, Osama bin Laden, quietly exerted his pernicious influence on his legions of crazed followers.

Pop culture had its share of earth-shakers.  It was hard to overlook Josh Duhamel, whose masterful performance in the universally-beloved modern classic Transformers I and II shattered expectations about what movie-goers could expect from an infantile two-hour commercial.  At the same time an inane late-night war between TV icons Jay Leno and Conan O’Brien diverted the attentions of a grateful nation in the same way as does a bright piece of string or a shiny object.  And somewhere, Steve Jobs did something that made effete Mac users cream their shorts.

Is This The World You Want For Your Children?

In sporting news, the San Francisco Giants, called the ‘Hitler of Major League Baseball’ by at least one satiric internet source, won the World Series over the nearly-as-odious Texas Rangers.  Also, there was some scandal in cricket–it’s a game copied from baseball, apparently–that stoked the ire of millions across the globe, but was otherwise unimportant.

Taking all these people and events into account, we worked tirelessly to determine the single most transformational factor in 2010.  In the end, we were unanimous on our selection of Promethean Times as Promethean Times‘ Person of the Year, citing Promethean Times‘ ongoing benefit to the global community as well as its consistent awesomeness.  Promethean Times is “extremely surprised, but pleased” by the announcement.

And for Promethean Times‘ Douchebag of the Year: Michael “MiLo” Lohan. What the hell, right?

His Infernal Majesty Assures Us That In 2011, He'll Step His Game Up.