G-Man Mark Felt had an eventful career, rising to become deputy director of the FBI, and until recently was best known for illegally wiretapping the Weather Underground, which caused the case against the unrepentant terrorists to be dismissed.  But Felt’s most significant contribution to history, which would have gone unknown until is 2008 death if his children hadn’t wanted to cash in on it, was as Watergate whistleblower Deep Throat.

Was Hoping For A Less Suggestive Nickname, Perhaps "Backdoor Intruder" Or "Throbby Johnson."

So far it doesn’t appear to be the cash cow the younger Felts had hoped.  It turns out that, even if they approve of the action, nobody likes a snitch.

Of the British-born Richard Leigh, who would rise to relative obscurity as the mountain man Beaver Dick, little is known or cared.

Unsurprisingly, When You Type "Beaver" And "Dick" Into A Search Engine, This Is One Of The Few Non-Pornographic Results.

Said to trail in fame only Jim Bridger and a handful of other mountain men no living man can name, Leigh’s humiliating nickname lives on through historical signposts. 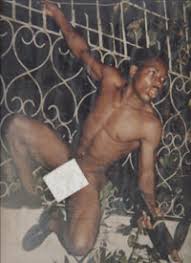 Admiral Richard Howe, the 1st Earl Howe (1726-1799), led a distinguished and remarkable life. Taking to the sea at an early age, Howe fought for Great Britain in many Eighteenth Century conflicts, including the War for American Independence.  Today, Lord Howe’s name is immortalized in ships and towns throughout the remaining rump of the British Empire.  Prince William, England’s future king, and his loutish brother Harry number among Howe’s descendants.

Despite so much good luck and historical recognition (Britain’s near-success against the rebellious colonies notwithstanding), Howe will forever be burdened by the odious sobriquet: Black Dick.

Beyond The Black: In Later Years Lord Howe Had To Hold The Damned Thing In Place If He Didn't Want To Make A Scene.

Are you kids sure you want to hear the story of how Grandpa got his nickname again?  You’ve heard this a million times.

Oh, all right, then.

Once, when your grandpa was a wee lad, not much older than yourselves, he met a tart from Tunisia . . .