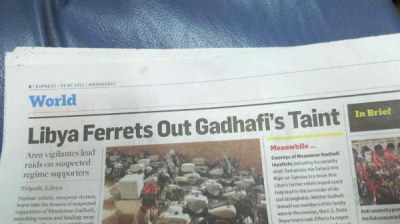 Turns Out It’s Dark, Foul And Full Of Sand.

In which we comment on contemporary headlines without first reading the articles:

25 members of Congress with lowest net worth ~ How much respect should we have for these mouth-breathers if they can’t even steal right?

Blue Ivy Carter: Why Did Beyonce And Jay-Z Choose That Name? ~ More to the point, why do you care?

What Is College For? ~ Doing drugs, having sex with questionable people and generally putting off real life for five or six years.  And maybe learning something.  You know, whatever.

Chris Paul’s Christmas present to the Clippers: Hope ~ Hope isn’t worth what it once was.

Teen Mom 2′ star pregnant ~ Being a brood sow is part of her contract.

LA arsons: ‘Right guy’ arrested, police chief says ~ You notice how they’ve never got the wrong guy, even when they do?

Photography: Big Beasts ~ We did a double-take as well, but that’s ‘Beasts,’ as in wild animals.

No Man Can Tame Those Magnificent Beasts.

Axl Rose completes jury duty ~ Not only did this endeavor take far less time than did the making of ‘Chinese Democracy,’ but the court transcript proved far easier on the ears.

Santorum on the rise: I’m the electable one ~ And we think you’ll be the best darn PTA recording secretary that the Midville School District ever had.  Wait.  You don’t mean for President, do you?  President of the United States and Leader of the Free World?  Rick, what fucking drugs are you on?

How to pick a cruise line for safety ~ Try to choose one that won’t drag you and your family to your briny graves on the seafloor.

Not This One, For Example.

Sword-Swallower Impales Himself on Stage ~ Although as yet there’s been no official confirmation on the weapon that caused the grisly accident, witnesses  say that it was most likely some kind of ax or spear.

California Catholic bishop resigns, says he has 2 kids ~ At least he’s honest. A lot of clergymen have literally hundreds of kids before they’re caught.

Imperfect teeth are big in Japan ~ Yeah, but everything looks bigger in Japan.

3 cars hit woman in wheelchair ~ Some headlines are funny enough on their own without our help.

Charlie's DTs Have Grown So Severe That He Now Believes Himself To Be Stalked By A Miniaturized Neil Armstrong, Who Tries Desperately To Fellate The Falling Star.

Cretinous 24-Hour party person Charlie Sheen has managed to keep his winning smile throughout his myriad legal and personal woes.  However, like so much else in Hollywood, it turns out that Sheen’s pearly whites are fakes, his toothy grin the result of porcelain and Polident.

Just To Clarify: When You Say 'Size Doesn't Matter,' Are You Talking About The Beak Or The Rack?

This  comes straight from the spunky mouth of Kacey Jordan, who spent time with the self-destructing TV personality during his recent 36-hour coke binge.  Jordan, who is delightedly making herself a talk-show sensation at Sheen’s expense, calls herself an adult actress because she is paid to have sex on camera.  However, as she also receives payment for non-filmed sex, she can add ‘whore’ to her list of credits.

Good News For Charlie: "My Dentist Thinks He Can Save Two Of 'Em!"

Jordan says that most of Sheen’s remaining handful of teeth are gold, and that the actor wears a porcelain bridge to prevent young children from screaming when they see him pass.  According to Jordan, the reason for this is clear: “Drugs.”  Jordan is not a doctor, but she has played a naughty nurse on several occasions, giving her the confidence to make this medical diagnosis.

If these sad revelations contain even a grain of truth, Sheen has fallen even further than anyone could have guessed.  It is too late to wish the former star a normal life, but perhaps not too late to simply hope for his continuing survival.  The upshot of Sheen’s grotesque smile contains at least one positive, however. The actor’s dental woes should serve him well during his next stint in prison, where smooth, slick gums are highly prized.

"Freeing Myself From The Slavery Of The Toothbrush Was The Best Thing I Ever Did. It Hardly Hurts Any More, And The Ladies Don't Mind That I Talk Like I've Got A Mouthful Of Snot."