We respond to today’s headlines without first reading the stories!

Whatever. We’ll Continue To Invest Our Assets In Lottery Tickets.

Parenting After Penn State: Can We Trust Coaches with Our Kids? ~ As much as we ever could.

Today: Woman gives birth on N.J. train ~ As it happens, the child was conceived just two cars down.

Why French Parents Are Superior ~ Does smelling like a turd in rotten-egg sauce stuffed inside the bloated belly of a week-old corpse make you a better parent? Because if it does, we totally get it.

Can’t Find Jeans That Fit? We Can Help ~ So can we. Lose weight.

This Undulant Curiosity Comes With Its Own Event Horizon.

Cops: Boy, 5, stabbed three over juice ~ You’d think after the first stabbing they’d just give the kid his fucking juice.

Should teams lose for Luck? ~ Good question, Confucius.  We’ve got one for you: should a person starve himself for satiety?

The Navy Is Depending on Dolphins to Keep the Strait of Hormuz Open ~ The Navy must be hurting for fresh ideas. Dolphins can’t even keep their asses out of tuna nets.

Unconsciously, Everyone Wants to Date a Hottie ~ But only unconsciously.  Our conscious mind directs us to copulate with fuglies.

Fun in Mogadishu? Indeed! ~ If you’re a khat-crazed buccaneer.

Jamie Lynn Spears: I’m Afraid of Not Being a Good Mom ~ Some fears are justified.

LA arson probe: Person of interest had ‘creepy’ smile, witness says ~ He totally did it, then.  The creepy smile is how you can tell.

What You’re Buying Is The Serial-Killer Smile; The ShamWow! Is An Extra.

What will Giants need to do in order to repeat? ~ Win another Super Bowl, ass.

Things You Didn’t Know About Your Penis ~ Please. After decades of rigorous hands-on study of our penii coupled with regular field-testing, there’s very little about our one-eyed heat-seeking moisture missiles that remains a mystery.

FIFTH OF GERMANS HOLD SOME ANTI-SEMITIC VIEWS – STUDY ~ The Germans? Wow, it’s always the ones you least suspect.

Native Americans, given less time to vote for president, sue SD ~ They always end up voting for Jack Daniels anyway.

“The Great Spirit Says I Must Seek A Vision.”

Former Survivor member sues Gingrich for using “Eye of Tiger” ~ You’d think they’d be thanking Gingrich–that song is about as old as he is.

Elderly Woman Leaves Condo To Homeless ~ And now no one wants to live there.

Why the 2012 Hispanic Vote Doesn’t Matter … Yet ~ You best watch your mouth if you don’t want to end up scrubbing your own floors.

We’ve Practically Made Ethnic Pandering Into A Science.

For Reals: Zsa Zsa Was Hot Long Ago.

Creepy gold-digger Frédèric Prinz von Anhalt announced recently that his wife, superannuated entertainment oddity Zsa Zsa Gabor, would like to have another child at 94.  Anhalt has reportedly spent $100,000 for the procedure.

Gabor, most famous for slapping a police officer, was a forerunner of today’s reality stars, who traded on her image rather than talents or actual accomplishments.  Although her list of film credits is relatively meager, the Hungarian harridan has tenaciously managed to keep herself in the tabloids.

"Better Get That Camera Out Of Here. Me And The Missus May Start On That Baby Right Now, If You Know What I Mean."

Those who are dubious about Gabor’s supposed quest for 2nd-time motherhood have derided the couple’s plan as an obscene affront against nature.  The crone has had difficulty walking since a 2002 car accident, and recently had her gangrenous right leg removed.  Anhalt explains that while Gabor’s desiccated body would be used as a host for the pregnancy, the couple would be soliciting the help of a donor, and would not be relying on the ancient actresses’ rotten eggs.

Anhalt, who gained his title after being adopted as an adult by the last surviving relative of Kaiser Wilhelm II, briefly considered a run for Governor of California before withdrawing to care for Gabor.  Anhalt has on more than one occasion returned the favor by adopting an adult male.  Now, however, the wily Kraut plans to employ perverted science to create biological children, proudly announcing that he’d already donated sperm to the cause.

The Personal Style Of A Prince: Start With A Dollop Of Prussian Officer And Liberal Amounts Of Sgt. Pepper, With Just A Dash Of Captain EO.

Not THAT Kind Of Squint! This Lovable Scamp Is Welcome At Our Birthday Party. We'll Be Putting Away The Breakables.

A recent British study revealed an heretofore undiscovered class of persecuted citizen: the squinty-eyed.  Although the term “squint” has gained popularity in the United Kingdom, it refers to the condition known as strabismus, where one of the eyes points a different direction when the other is looking forward.  Called “Creep Eye” or “Goofy Eye” in the United States, squint is evinced in about 1 in 20 children.

A British study of children ages 3-12 determined that if given a choice between inviting one of these bipedal Boston terriers to their birthday party or instead inviting a Normal, children overwhelmingly chose to exclude the child with squints.  Scientists are not surprised.

Thanks To Growing Societal Acceptance, Squinty Models Can Now Get Work.

Neither is this US mother, ‘Deborah,’ who asked that her real name not be used.

I don’t have anything against those unfortunate children.  I had a cousin who was . . . like that.  Well, maybe she still is–we haven’t spoken in years.  And it’s not that I don’t think they should go to birthday parties, because I think all children should experience at least one birthday party in their lives.

Would she invite a squinter to her child’s birthday party?

Look, I’m not a bad person, okay?  But on {Jonathan’s} special day–I just can’t bear the thought of him trying to eat his cake, while across the table is one of those . . . those children.  As if it’s all perfectly normal.

Fortunately ‘Deborah’s’ attitudes do not represent the larger facet of modern society.  As the world becomes more aware of the walleyed, it will embrace them into the warm and welcoming bosom of humanity.

Dude, You Should Totally Invite Him. Always Eager To Please, Squinty Kids Bring The Coolest Presents.

Just as long as they don’t watch us while we’re eating.  That’s really creepy.

Harris, Trained As A Geriatric Nurse, Discreetly Performs CPR On Her Enfeebled Fiancée.

The 'Playboy Man': A Timeless Archetype Of Swaggering Virility, Of A Macho So Thick And Viscous That It Sticks To Walls.

Critics contend that while the desiccated octogenarian’s comfort with Twitter is mildly charming, there is something more than a little unseemly about Hefner marrying a woman six decades his junior.  Playboy representatives dismissed this as small-minded puritanism, reaffirming Hefner’s commitment to his soulless, little boy’s fantasy of a lifestyle.

Harris is not the first instance in which Hef has dipped into the company coffers: he’s also dated Barbi Benton, Shannon Tweed, Donna Michelle and a harem’s worth of others.  In recent years the dirty old man boasted of dating up to seven Playmates at a time, thrusting a symbolic middle finger at erectile dysfunction.  Harris won’t even be the first Playmate to wed Hef.  That honor goes to Kimberly Conrad, Playboy‘s 1989 Playmate of the Year.  Conrad and Hefner have two children, the older of whom is five years younger than Harris. Hefner’s oldest child, Christie, is thirty-three years older than Harris.

Harris Knows That If She's Unfaithful To Hef, There's Already A Replacement Waiting To Take Her Place.

Ms. Harris is said to be ecstatic about life with Playboy‘s original visionary, noting that Hefner is about the same age as her great-grandfather, “And I love Poppy-Pop thiiiiiiis much!” she said, indicating with her arms that her love for the two senior citizens measured well over a yard {0.91m}.  Harris then walked into a door post.  She later apologized to the post. 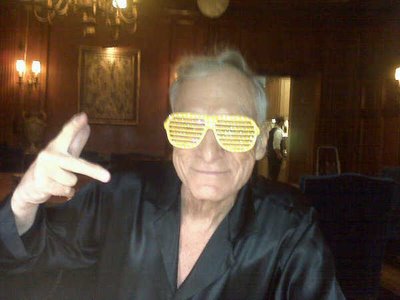 When Grandpa Starts Acting This Way, It's Time To Call Shady Acres.

In a perfect world, Hugh and Crystal’s relationship would be free from society’s preconceptions regarding romance and the elderly.  Life not being perfect, we simply wish the best to this special couple, and share Harris’ hope that she will be the lucky rider holding the reins when the horse finally kicks over.  Best of luck, Crystal–don’t sign anything.

Once Content To Be A Caricature Of Himself, Hef's Current Ambition Is To Live Every Day Of His Life As If It Were A Benny Hill Sketch.

“Does ‘Waiting for Hef to Die’ count as a hobby?”